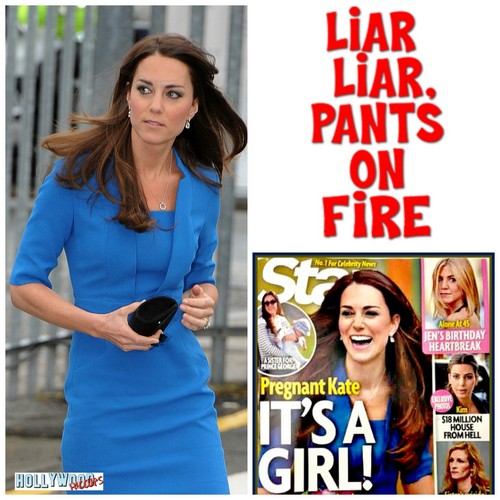 According to Star Magazine’s cover this week Kate Middleton is three months pregnant with a baby girl, she surprised Prince William with the news on Valentine’s Day.  Also, according to Star magazine, William and Kate will be not be naming their daughter after his late mother Princess Diana.

This isn’t the first rumor to emerge that Kate Middleton is pregnant, and it definitely won’t be the last.  We’re not buying it though.  Just last week on Valentine’s Day Kate Middleton stepped out and conducted her royal duties, opening the ICAP Art Room at Northolt High School, Ealing in London, England.  The Duchess of Cambridge impressed attendees of the event when she arrived in a royal blue skirt, looking healthier and trimmer than ever.

We all remember Kate Middleton’s eventful pregnancy with her first son George.  Middleton suffered from severe morning sickness, and even ended up being hospitalized in the early months of her pregnancy.  If Kate was three months pregnant, there is no way she would be out opening art rooms, after her complications during her last pregnancy the Royals would have her on bed rest, surrounded by a 24/7 staff.

Also, we understand that the Royal family obviously has privileges and means that we do not.  But, regardless of whether you are an average Joe or the future Queen Of England, you have to wait until you are at least of your first trimester to know the sex of your baby.  Let’s just pretend for a moment that the rumors aren’t absurd, and Kate Middleton is three months pregnant, there is no way Star magazine would already know that her unborn child is a girl!