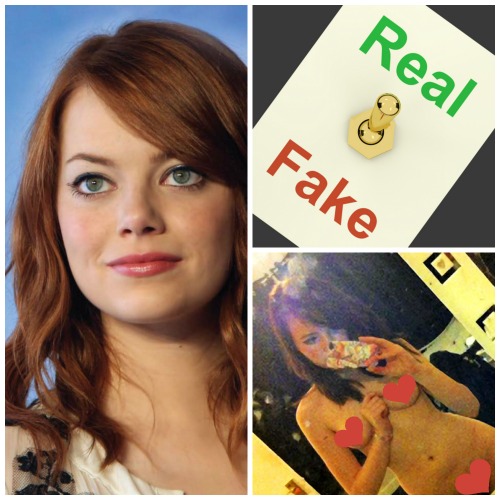 Emma Stone has had some box office sensations in her movie career, but she is now receiving credit for something even more sensational..a naked selfie that has been leaked and has since gone viral.

Though Emma’s rep denies it is her in the photo (don’t they all?), it sure looks like the raven-haired beauty. She is of similar proportions, has the same skin color, similar hair, and the facial features are identical. The timing of this leak seems suspicious. The Amazing Spiderman 2, in which Stone stars with her boyfriend Andrew Garfield is set for release in May.  She has at least two other projects set to be released this year. As every celebrity knows, there is always someone younger and better to take over the “it girl” throne.  So, perhaps Emma began to worry a bit after her last bomb, Movie 43, had some very harsh reviews.

We all know the pattern…a bad movie or two, the need for a career resurrection, they all point to naked selfies “accidentally” getting leaked, or a stint on Dancing with the Stars. My guess is Emma chose the former as it is much easier and a little sexier for promoting an upcoming Spiderman flick. Oddly enough, it was recently reported that the movie has a new banner and image.

Tell us what think! Yet another (yawn) celebrity “accidentally” leaking a naked selfie? A private pic meant for boyfriend Andrew that somehow got into the wrong hands? Or, is it a complete fake and not Emma Stone at all? Weigh in, HH fans! We want to hear your thoughts!

Update: Since this story was submitted the author came across evidence that shows that either the photo is not Emma’s or it was taken prior to 2010: post 201o Emma has a tattoo on her left wrist which is not present in her supposed nude selfie.