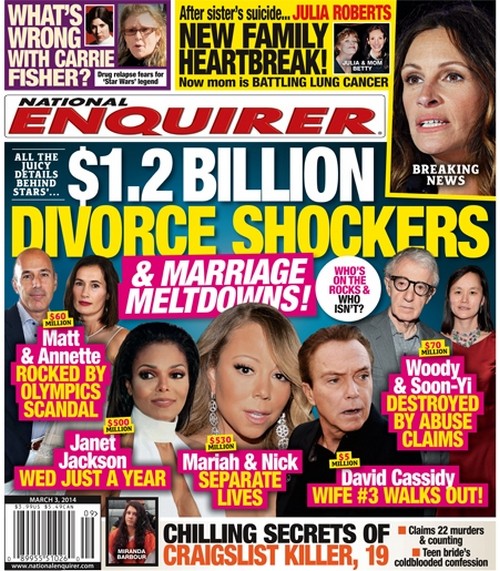 The current issue of National Enquirer features the cover story, “Divorce Shockers & Marriage Meltdowns.”  This week’s mag has the scoop on all the gasp… secret divorces happening around Tinsel Town and there is a bushel full.

The first marriage on the list is Mariah Carey and Nick Cannon‘s marriage.  There has been speculation for months, especially after the couple hadn’t been photographed together for a long time, that their marriage was dunzo.  Well this week’s issue is claiming there is a $530 million divorce on the way. WOWZA!

David Cassidy, the King of DUI’s wife has walked out.    This is wife number 3 for David, so his track record has not been great. No surprise here!  Another couple on the list is Woody Allen and Soon-Yi.  Apparently their marriage is being destroyed by all the rumors circulating that Woody is a child abuser.  Here I thought Soon-Yi got fed up being married to her grandpa.  Once I read her step-sister Dylan Farrow’s open letter I would have kicked this creep to the curb STAT!

Janet Jackson just wed Wissam al Mana married a skant one year ago and apparently the couples wedding bliss has ended and they are in the middle of a $500 million divorce.

Marriages in Hollywood don’t generally last longer than a New York minutes, but if you want to know all the juicy details of the divorces, head out and pick up the current issue of National Enquirer.