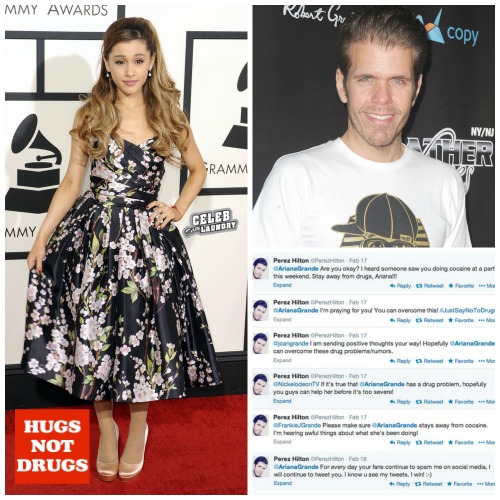 Did another Nickelodeon star fall prey to the industry’s ever-present supply of drugs? Ariana Grande, former start of iCarly, and now a recording artist who is also known for her role on Sam & Cat is the subject of cocaine rumors shared by Perez Hilton.

Perez and Ariana have had some history of bad blood and some say the recent tweets from Hilton to Ariana, her brother, and Nickelodeon about reported drug use by Ariana are simply retaliation for Ariana not using Hilton as her manager after he approached her about it, and in response to her neglect for not reprimanding fans after they tweeted Hilton mean comments about his son.

Might sound arguable, but we need to look at some of the facts. First of all, Hilton has pretty thick skin. Not so sure he’d be that broken up over comments from Ariana’s teeny-bopper fans. Secondly, Ariana recorded “The Way” with mac Miller, who has been accused of using cocaine dating back to 2012, when the rumors of his alleged drug use were at a high (no pun intended) and it has been reported that the two got very close, with some even saying Ariana hooked up with Miller. Lastly, petite Ariana seems to be getting thinner and thinner and has been keeping some dangerous company. We know this after she had been spotted out partying with Bieber.

So could the pressures of Hollywood, a music and acting career be the blame for her caving under pressure? It seems Perez believes her career could have something to do with it, tweeting Nickelodeon, “If it’s true that @ArianaGrande has a drug problem, hopefully you guys can help her before it’s too severe!”

Ariana, who her sources say is scared to even use over-the-counter Tylenol (yes, seriously), of course has her rep denying any allegations of drug use and is now claiming she’s hired litigators to sue Hilton for slander.  Until they have attorneys willing to litigate for “the truth hurts” don’t expect her case to get too far.  Her rep is simply providing the textbook response to drug allegations…that it never happened and that lawyers are already drawing up documents to sue. We’ve seen this one too many times.

Tell us your thoughts! Is Ariana dabbling in cocaine to stay stick thin? Did Mac Miller, who has been rumored to have a cocaine problem, get Ariana hooked on the drug? Or is Perez simply out for revenge? We want to hear from you!