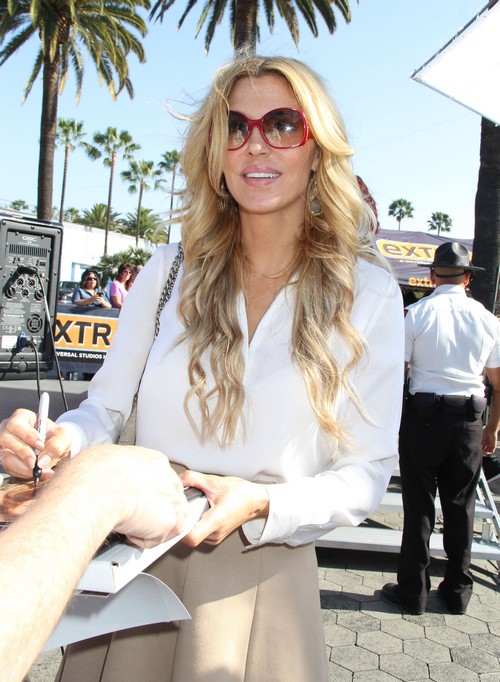 We reported yesterday that RHOBH star Brandi Glanville was claiming her ex-hubby Eddie Cibrian was suing her for child support.  The angry reality star took to social media and tweeted, “Mr. fancy new cars & house man is asking ME for child support.”  We were a little confused as to why Eddie Cibrian would go after Brandi for child support, when she helps take care of their boys, and Eddie and Leann obviously do not have any problems financially.  We came to the conclusion either Eddie was suing her for child support to get back at her for slamming him and Leann in her new book, or Brandi was flat out lying and just stirring the pot and causing more drama to promote her book.

It turns out Brandi Glanville was actually flat out lying about Eddie suing her for child support, or else she was so drunk when she got the letter in the mail from the lawyer she misunderstood what it meant.  TMZ has acquired a copy of the letter that Brandi received in the mail, and it actually has nothing to do with child support, she is being sued for spousal support.  Apparently, Eddie’s lawyers did an audit of the Eddie and Brandi mess, and realized that Eddie had overpaid Brandi $114,000 in spousal support payments.  He simply wants his money back.  And, it gets better!  When Brandi complained on Twitter she made it sound like she was going to have to hand cash over, that she didn’t necessarily have.  According to the letter TMZ obtained, Brandi doesn’t have to pay Eddie a dime back.  The lawyers are just deducting that $114,000 from Brandi’s share of Eddie’s retirement funds.  So, basically Brandi just received an advance of the money she would have gotten when Eddie retired.  She doesn’t have to pay it back, she just won’t receive it later.  That poor thing!

Are you guys surprised that Brandi Glanville lied on Twitter … again?  Or are you as sick of her drama as we are?