Katie Holmes And Jamie Foxx Still Trying To Keep Their Relationship A Secret – Are They Scared Of Tom Cruise? 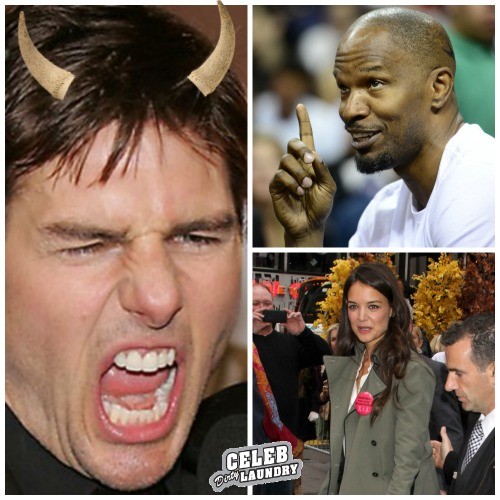 Rumors have been floating around for months that Katie Holmes and Jamie Foxx are secretly dating.  They’re not very good at keeping their secret relationship a secret though, the couple has been seen together multiple times.  A source came forward after Super Bowl Weekend last month, and dished to Page Six about Holmes and Foxx’s steamy hook-up after a Super Bowl Party.  According to Page Six’s exclusive source, “Katie flew private to California to stay with Jamie at his home around the Grammys.  Foxx’s beautiful daughter Corinne was his date for the Grammys. But he and Holmes also spent time together during Super Bowl weekend, although they attended the game separately.”  The source also added that “Jamie is being careful because he has a lot of respect for Tom.”

According to a recent report in OK! Magazine, respect may not the only reason Katie Holmes and Jamie Foxx have been trying to keep their relationships and steamy hook-ups a secret.  A source told OK! That the jig is up, and everyone wants Katie and Jamie to come out publicly with their relationship.  The source even referred to their not-so-secret relationship as “the worst kept secret in Hollywood.”

So, what is Katie Holmes and Jamie Foxx’s hold up?  Everyone knows they are already dating, why not just admit it already and stop sneaking around?  Sure, Jamie may have “respect” for Tom, but there is no way Tom doesn’t know about them by now.  People are beginning to wonder if they are trying to keep their relationship a secret out of fear, not respect.  Tom Cruise is borderline psychotic when it comes to his ex Katie Holmes, maybe Katie and Jamie are afraid of what Tom would do if they took their relationship public?

Do you think Jamie and Katie are trying to keep their relationship a secret because they are afraid of Tom Cruise?  Let us know in the comment section below.