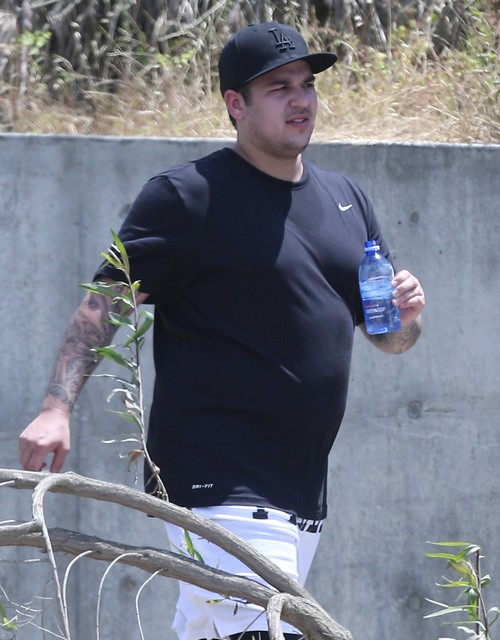 Looks like Rob is not Keeping Up with the Kardashians! Rob Kardashian has seemingly broken the mold by not fitting into his family’s typecasting…(and his clothing)! Rob has continued to put on weight since his disastrous break-up with singer Rita Ora in 2012. He was heartbroken over losing her and has been feeding his depression with junk food and beer.

When sister Khloe Kardashian started losing weight with the help of rapper The Game, Rob, 26, decided to jump on the fitness bandwagon. While he lost a little weight, it wasn’t nearly enough to even notice and he is becoming even more depressed over his looks. Rob’s family has built an empire on vanity and arrogance and he wants no part of it.

Kris Jenner, the momager form hell, is so vain and worried about the public perception of her family, that she is strongly encouraging Rob to get his stomach stapled, under the premise she is concerned for his health. Rob knows her true motives and though he is considering the surgery, it is for his own personal reasons, and has nothing to do with Kris’ or the family’s image.

After pictures showed a bloated Rob looking even heavier, The National Enquirer reported that Kris ordered him to go to a fat camp after labeling him “a fat slob.” Rob is frustrated because working out is not taking the weight off fast enough and he has been unable to stick to healthier eating habits. Instead of his mother trying to get him help for the depression he is experiencing, she can only see him as a potential risk for the Kardashian brand.

While the surgery can be risky, Rob is strongly considering it because he wants a fast solution. He is in a vicious cycle where he is eating because he is depressed, then gets more depressed by his looks and eats even more. He needs a fast solution and feels this is the only way to go. While the surgery most often produces good results, Rob will have to be responsible for developing healthier eating habits or the surgery will have been for nothing. Maybe he can ask the surgeon to save the fat they remove for Kim’s butt injections. The family that shares their body fat together, stays together, right? Only in Kardashi-land, folks! Tell us what you think. Does Rob need surgery or can he lose the weight on his own?

Kendall Jenner Quitting Keeping Up With The Kardashians: Landed Reality TV Show With…