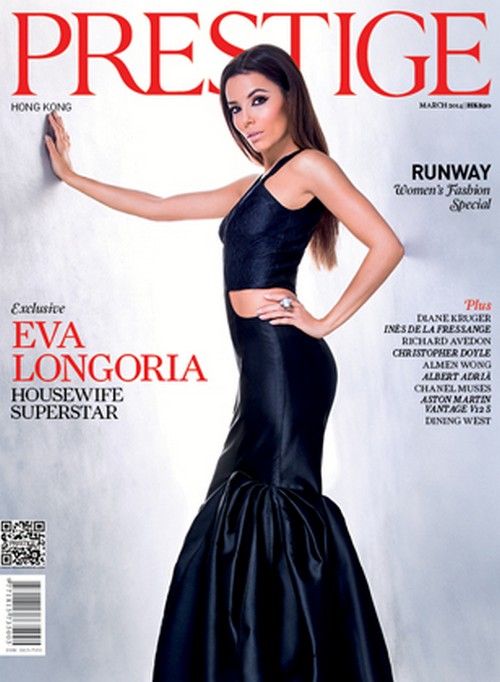 Desperate Housewives star Eva Longoria graces the March 2014 cover of Prestige Hong Kong.  Was there ever a sassier siren on the small screen than Eva Longoria’s Gabrielle Solis, the trophy wife of Desperate Housewives and purveyor of such magnificently frivolous irrelevances as, “I have read the constitution and it does not protect ugly people,” and, “Sexsomnia. It’s real. Look it up.”

Dynasty’s Alexis Carrington may have reigned supreme as the bitch queen of the 1980s, with her padded shoulders, cigarillos and endless scheming, but Solis’s smouldering yet vacuous sexiness was in a very different league – and one that was entirely appropriate to the cynicism of the noughties.

Yet Eva Longoria, the beautiful actress behind the vampy Latina, could hardly be more unlike her televisual alter ego, her drive and passion having propelled her in directions infinitely more profound and altruistic. Since she first adorned the cover of Prestige Hong Kong in 2009, Longoria – then in full Housewives flight – has launched a series of  initiatives aimed at bettering the lives of the Hispanic community. “My life’s work is going to be in education,” she tells the magazine “I feel that it’s the one  thing that can break the cycle of poverty in a very long-term way.”

To read more on the interview, pick up Prestige Magazine.