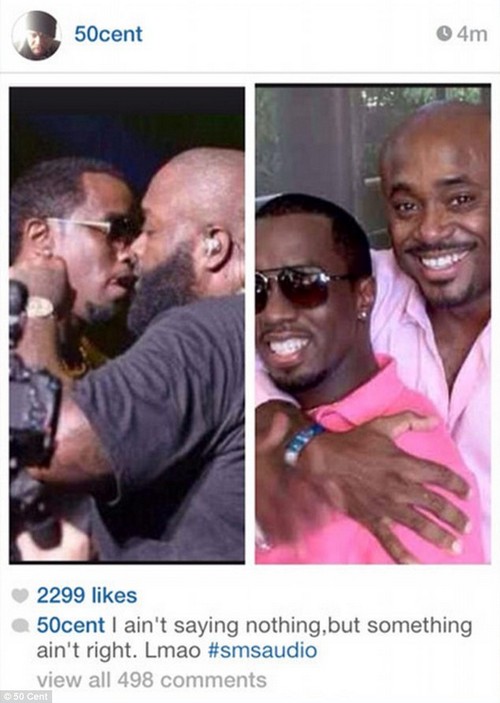 Rapper 50 Cent, real name Curtis Jackson, gave his Instagram followers the impression he was ready to start a war on Sunday when he posted pics of Diddy (né Sean Combs), William Roberts II (aka Rick Ross), and record executive Steve Stout and insinuated they were gay.  While he likely realized the magnitude of what he’d done and deleted the post shortly afterward, the damage has already been done.

In one of the pics, it appears that Rick Ross and Diddy are engaged in a hug and ready to kiss. However, the two were performing at a concert, and it was simply a bad angle that made it seem as though Ross is ready to plant his lips on Diddy.  In the second photo, Stout has his arm around Diddy while both are donning pink shirts and large grins. The photo was taken in 2011 at a Diddy-sponsored party in Vegas. The photo had people talking from the moment it first appeared, which is the precise reason 50 chose it. BET had previously posted the same picture, which shows Diddy actually leaning on Stout with the caption, “Isn’t it bromantic?” They noted that the two had made up after a 1999 altercation that ended with Diddy smacking Stout with a champagne bottle.

Apparently 50 Cent has beef with all three men and chose this medium for attempting to raise speculation that his three nemeses are much closer than some may think, knowing it would not sit well with any of the men. Diddy and 50 have been battling for years, with many speculating that their beef stems from a contract issue over rapper Mase.  After a couple attempts to play nice, the two battled in 2012 at the BET Hip Hop Awards, hence putting the last nail in the coffin for any chance of reconciliation. Stout basically called 50 Cent a has-been in a VH1 interview, and Rick and 50 have threatened each other over the years over drama between their camps and comments 50 made about a shooting incident involving Ross.

50 captioned the photos, “I ain’t saying nothing, but something ain’t right. Lmao” and had over 500 comments and over 2000 likes before he deleted the post.  Better believe all three men know about it and are already plotting some type of revenge.  Mr. Curtis Jackson may want to stay away from any events where he may run into these three, because he just upped the ante in this game.