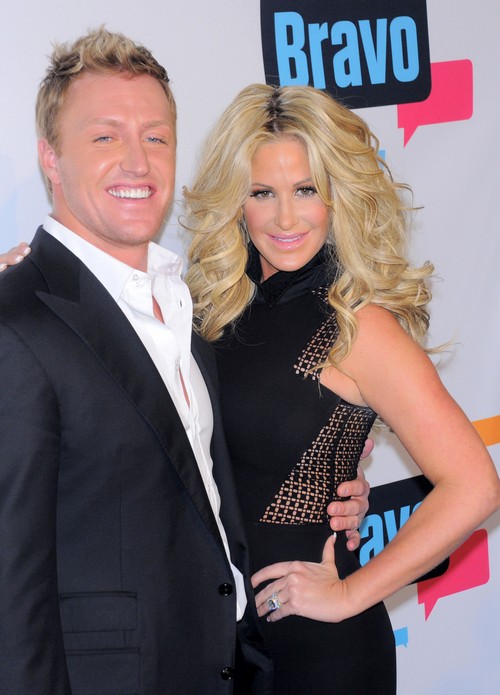 Kim Zolciak should have considered holding off on making even more babies with husband Kroy Biermann until they were financially able to handle the load. Since the former Real Housewives of Atlanta Star married the professional football player, she has given birth to four children, making her the mother of six. Despite the fact the couple has been having money problems for years, they have not stopped adding to their brood, now forcing them into possible eviction from their home.

Just a few weeks after Kim, 35, took a $300 thousand dollar loan to pay off the construction on her Atlanta mansion, RadarOnline.com reports the couple has been served with two tax liens totaling about $12,000.00 with a deadline date to pay in full of April 11. If they cannot come up with the money, their home will be seized.

The 7,186 square-foot home was purchased by the couple in 2012, but they’ve been doing renovations since they moved in. Always one to live beyond her means, Kim has initiated renovations including a two-story master closet, eight fireplaces, elegant staircases, and a large, elaborate pool.

Amazingly, the couple was recently bragging on Twitter about getting another 4-wheeler, all the while complaining about the how negative the media is, even calling bulls*^t on the tax story. It cannot be cheap to raise 6 kids, and with Kim’s need to show off her over-the-top lifestyle, these two are going to end up with nothing. Wonder how much they’ve saved for their children’s education. Likely the college funds are locked up in Kim’s two-story closet.

Celebritynetworth.com reports Kim to have a net worth of $500 thousand. Kroy, an Atlanta Falcon, is out for the season due to an injury but is still under contract until 2015. While he’s set for another year for $2.55 million, he could get cut after his contract is up. Kroy, 28, and Kim better stop making babies, and start making money if they want to stay in their home.