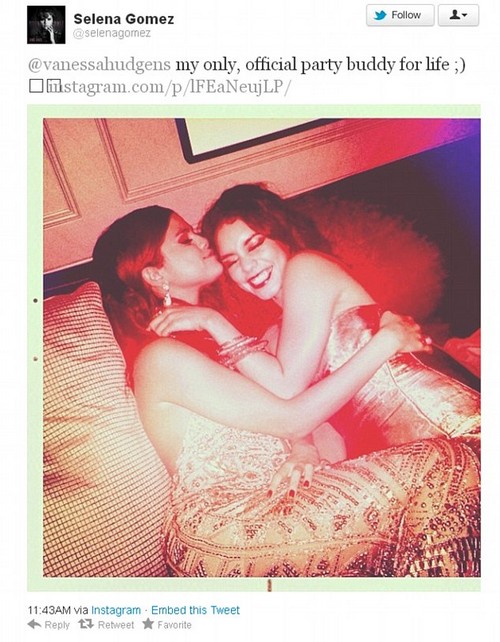 Interesting that only weeks after leaving rehab, Selena Gomez posts an Instagram photo of herself with Spring Breakers costar and friend Vanessa Hudgens referred to by Selena, 21, as “my only, official party buddy for life ;).” For someone who has denied she still has a problem after a short stint in rehab, it doesn’t seem appropriate to be referring to friends as “party buddies.” Selena and Vanessa’s picture was taken after one too many drinks at Sunday’s Vanity Fair Oscar party, where sources say Gomez was partying and stumbling her way through the night.

Back when the two filmed Spring Breakers together, there were reports that Selena was teased for being so straight-laced and young by her older, wilder costars who took the whole “spring break” standard a bit too seriously. This was at a time when Selena was vulnerable and wanted to fit in with her costars as she attempted to break out from her young Disney persona and be considered for more mature roles.  Throughout her time filming she was still with bad boy Justin Bieber, who is notorious for living an alcohol- and drug-fueled lifestyle.

With so many bad influences, it was no wonder that Selena began drinking and experimenting with drugs. A source from the Vanity Fair party told RadarOnline that Gomez was “drinking constantly throughout the entire party when I saw her.” the source goes on to say that the talented singer and actress was slurring her words and stumbling in her heels by the end of the event and almost “toppled right over.” Let’s hope someone from her camp steps in quickly to save this sinking starlet.