Miley Cyrus Broke Up With Mike.Will.Made.It Because She Liked Girls: Report 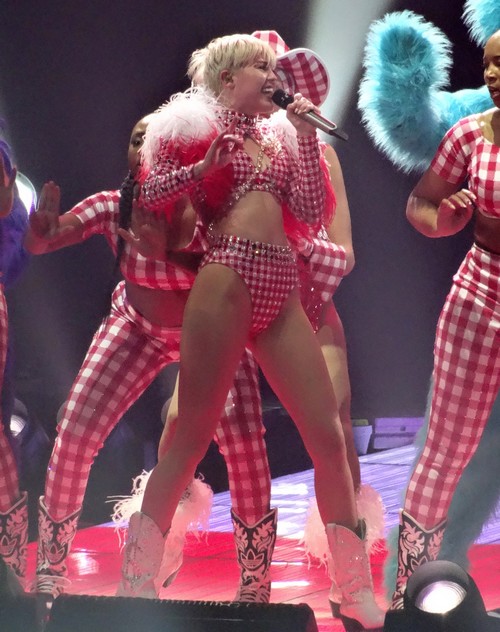 Back in 2012, Evan Rachel Wood claimed that Miley Cyrus was “leaning towards gay.” Via Twitter, Wood went on to say, “I myself am bisexual and have always ‘joked’ about miley giving me gay vibes. Not a bad thing! Just an observation.” No one can say that Wood’s observation was too far off.  Miley fans know that the wild child has long supported the lesbian, gay, bisexual, and transgender (LGBT) community, and even had an equality sign tattooed on her middle finger, in honor of her support for same-sex marriage.

Miley has shared that her favorite fans are her gay fans, she praised Disney for finally including a same-sex couple on one of its popular shows, and has not only tweeted in the past about her girl crush on Katy Perry, she attempted to plant a long, deep kiss on Katy as she performed recently on tour. Since the now infamous kiss where Katy pulled away on camera, there have been Tweets going back and forth between the two after Katy made comments about not wanting to kiss Miley because of the unknown whereabouts of the We Can’t Stop singer’s tongue. I cannot say that I blame her.

But is all of this enough to label Miley gay or bisexual. Not at all. But..an ex-lover who claims Miley broke up with him because she confessed to having a preference for women is something very different! MTO.com reports that Miley’s producer and former lover, Mike.Will.Made.It (yes, that is the name he goes by) has shared with a very reliable source that Miley broke up with him because she was “no longer into guys.” Apparently, MTO reports, Mike really liked Miley, but just didn’t do it for her anymore.  Stay tuned as we will surely keep you up to date on Miley’s next flame.  Tell us what you think…is Miley gay? Bisexual? Or is Mike making excuses for the reason Miley ended it with him?