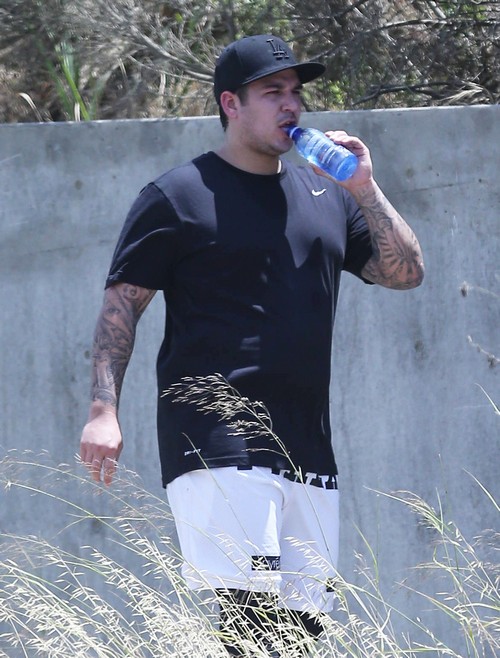 We all love to hate reality TV moguls, the Kardashians, but last night’s midseason finale of Keeping Up With The Kardashians made it hard not to feel sorry Kris Jenner’s only son, Rob Kardashian.

Over the past year Rob Kardashian has undergone a dramatic physical transformation, gaining over 70 pounds and about 70 new tattoos.  The KUWTK star was once considered a teen heart throb, and is now the center of daily fat jokes from the relentless media.  Everyone enjoyed Rob’s sudden bout with obesity a little.  The Kardashians love to show off their lavish lifestyles and perfect bodies, it was nice to know at least one member of their family was still human and struggling with something that most Americans do.

Last night on the KUWTK midseason finale we learned just how serious Rob’s sudden weight gain is though.  The young reality star is not even thirty, and already facing a slew of health problems including diabetes and possible liver failure.  We watched Rob get blood work done and finally come to terms with his obesity and the severity of it, cry at the dermatologist because he didn’t want to take his shirt off on camera, set up a strict workout regimen with a trainer, clean out all of the junk food in his refrigerator, and get meet with a nutritionist.

Kris Jenner blames her son’s health problems and rapid weight gain on a “hard time in his life.”  But, none of the Kardashians are really shedding any light on what happened in Rob’s life to inspire him to eat his feelings for the last year.  Some KUWTK viewers blame it on his Momager Kris Jenner constantly harassing him about his body and appearance, others believe that it may be related to the secret love child he allegedly has in Florida that his family won’t allow him to see.  Regardless of what inspired Rob to let his health and body go, it’s clearly becoming very serious.