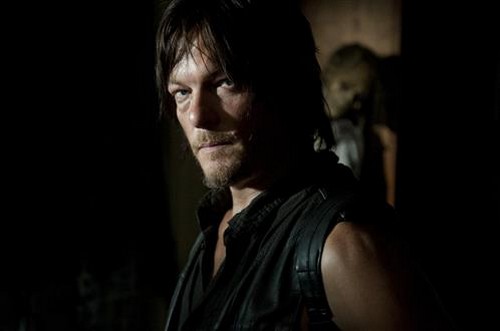 On last night’s season 4 episode 13 of THE WALKING DEAD called, “Alone,” the show opened with Flashback: Bob is walking in a forest; he is by himself, he is eating out of a jar of something with his hands now he is hiding behind a tree,zombies are walking around behind him. He pretty much is just stumbling around tired and alone, it reminds me of Michonne earlier this season. Bob continues to walk and finds a little hut, he use some wire fence to close it up . Bob is watching a Walker struggling to get inside his little hut. Bob finds a truck and gets on top of it, a lot of Walkers go by.

Bob just lays on top of the truck looking lost.bob is walking down the side of the road when Glenn and Darryl stop. Darryl gets off his bike , removes his cross bow and walks over to him,Glenn follows. Darryl says hi and then ask Bob if he is alone. Bob says yes and then tells him he used to be with other groups, but is alone now. Bob wants to know of they have a camp, and Darryl wants to know how many Walkers Bob has killed. Bob tells Darryl over a dozen. Darryl and glenn exchange a glance. Darryl ask Bob if he wants to come with them, Bob tells him yes. Bob gets in the truck with Glenn and they head off.

Bob, Sasha and Maggie are surrounded by a thick fog, they can hear the Walkers but have no idea which direction they are coming from. One begins to appear, and where there’s one…… Maggie is about two seconds from getting bit but Sasha saves her by shooting the Walker in the head. Bob did get munched but luckily it was his bandage the Walker sunk it’s teeth into unluckily the bullet wound is bleeding.

Beth has a cross bow teaching her how to use it, she thinks she is getting really good at it. Darryl and Beth come up on a Walker who is having a snack of the human variety. Beth manages to shoot the Walker with the crossbow right before she gets stuck in a trap of the bear variety, good thing she is wearing boots. Darryl comes to the rescue and smashes the Walker in the head with the crossbow.

Maggie, Sasha, and Bob are talking strategy still surrounded by fog. Maggie ask if they are ready. Sasha says they need to wait, and that they only have six bullets. Bob agrees and says there is no need to go getting sloppy. Maggie’s compass is broke. Bob tells her no problem the sun rises in the east and sets in the west and they will keep a eye on it in between. Maggie and Sasha just stay quiet.

Darryl and Beth come to a cemetery. Beth needs to stop and sit down for a minute. Darryl offers her a piggy back ride instead. Beth talks about how there are still good people, Darryl tells her he doesn’t think the good ones survive. They come to a headstone that says beloved father. Beth gets down and looks at it. Darryl gets a flower and lays it on top of it. Beth laces her hands through Darryl’s and they stand there for a minute.

Maggie notices a sign for Terminus. Bob tells her they heard about it on the radio when they were out getting the vaccine. Maggie is surprised to find out someone was broadcasting. Sasha wants to know what they said. Bob tells her he couldn’t make it out but know nows what they were saying because he sees it, “those who arrive, survive.” Sasha looks very doubtful. Maggie says they should go. Sasha tells,her she thought they were looking for Glenn. Maggie tells her if he saw one of those signs he would look for her there. Sasha thinks it’s to far. Bob says it’s the best lead they have had so far. Sasha thinks it’s to good to be true. Bob ask Sasha what she wants to do, Bob says they can’t split up and ask her if she wants to take a vote. Sasha says they don’t need a vote and starts walking down the railroad tracks.

Daryl and Beth head inside a house they find behind the cemetery. Did these two learn nothing from last week? Darryl takes the lead and goes in first to make sure it’s safe for Beth to come in. Beth comments on how clean it is,Darryl is equally as surprised and thinks someone may still be around. . Darryl heads downstairs and they are in something like a makeshift morgue. Darryl wants to wrap her foot. Beth thinks the gesture this person made is beautiful because they remembered the Walkers were once human.

Maggie is out hunting for firewood. Bob knows Sasha wants to stop going and she doesn’t deny it. Sasha again points out they only have six bullets and that He is still bleeding. She tells him she thinks that Glenn is dead and that the next town they see they need to stop and set up in, and they need to talk Maggie into it.

Darryl and Beth are looking for food in the house and hit the jackpot. Darryl notices there is no dust on the cabinets, Darryl says they will take some of it and leave the rest. Darryl is setting up a trap to alert them of Walkers outside the house. Beth is inside playing the piano and singing. Darryl comes back in and lays in a coffin and tells Beth it’s the most comfortable bed he has had in years, he tells Beth to keep playing because there is no jukebox.

Sasha wakes up the next morning to find out that Maggie has left a note telling them she has left. Bob tells Sasha they can still catch up to her. Maggie is walking down the tracks she stops to stick a knife in a billboard when she hears a Walker. Maggie calmly waits for it to get to her then she takes it down a pond stabs it in the head, she cuts a hole in its gut and proceeds to ram her hand in and come out covered in Walker blood.

Bob and Sasha are walking down the tracks, he is optimistic and she is being a Debbie downer. Bob tells her self awareness is a beautiful thing and Sasha should try it some time. Bob then tells her she is as bullheaded as Maggie sometimes. They come up to the dead Walker and a note Maggie has written in blood in the shack the bulletin board is attached to that says “Glenn go to Terminus. Maggie.”

Darryl is carrying Beth into the kitchen. He sits her in a chair and they start to eat. They hear a noise and when Darryl opens the door he sees a dog standing there with one eye, he goes to rub it but it runs away. Beth ask if he got it. Darryl tells her maybe it will comeback.

Sasha is awake in the middle of the night. You can hear a Walker somewhere around her and Bob. Bob tells her he is awake, he ask her if she can see it. Sasha says no she thinks it’s stuck on something. Sasha tells Bob he needs to sleep he says he will try, but he Walker keeps him awake. Sasha ask him what they are doing out there. Bib ask her why she thinks Tyreese is dead. Sasha ask him what. Bob tells her he knows that of Tyreese were alive he would head to Terminus and that Sasha knows that so why does she think he is dead. Sasha stays quiet, so Bob lays back down.

Darryl and Beth are eating. Beth is writing the owner of the house a thank you note. Darryl tells her she doesn’t need to that they maybe might stick around and she can thank them in person. Darryl hears a noise and opens the door, it’s a hoard of Walkers and he screams for Beth to leave, he tells her to wait about the street and he will meet her there. Beth heads outside. Darryl gets stuck downstairs but only for a minute, he heads out and doesn’t see Beth only her bag pack. Darryl hears a car take off and turns and starts screaming for Beth. Darryl runs after it.

Bob and Sasha are still following the tracks. They come to another sign that Maggie left for Glenn. Bob tells sash if they keep to the tracks and pick up pace they should be able to catch up to her.

Darryl is still running after the car, pretty soon he is walking. Darryl finally stops, drops his crossbow and sits down in front of some railroad tracks.

Sasha wants Bob to stop and make camp at this town they are in. Bob tells her he isn’t going to stop going after Maggie. Bob thinks Sasha is afraid. Sasha tells him she isn’t. Bob tells her then this is it. Bob kisses Sasha. Sasha tells,him he doesn’t have to do it. Bob leaves to find Maggie. Sasha watches him go.

Sasha heads into a building and up the stairs, she puts her weapons and her bag pack down and cries. She pulls herself together and looks out a window. She sees Maggie laying in between some Walkers and goes to open the window to call her, the window falls out and the crash attracts some Walkers. Sasha runs downstairs with her gun to help Maggie.

Darryl is still sitting down when he is met with a bunch of guys. He smacks one of the guys in the face and holds his crossbow on him, but since Darryl is surrounded he doesn’t have mush I’d a choice and he has to drop his weapon. The man he smacked introduces himself as Joe.

Sash and Maggie find Bob and he hugs them both. They continue down the railroad tracks towards Terminus.

Glenn is looking at a sign that shows the way to Terminus.

If you just cannot wait till next week’s episode our sister site Celeb Dirty Laundry has 2 sneak peek videos and a few spoilers to wet your appetite, right here.