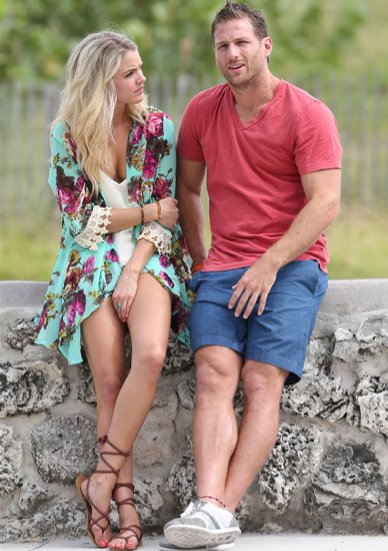 Bachelor fans are still reeling from the bizarre and painfully awkward season finale of Season 18 of The Bachelor.  Among the many horribly epic moments last night on the live After The Final Rose special episode, Chris Harrison asks Juan Pablo if he was ready to share his “big surprise” with the audience.  Chris had been teasing the audience that Juan Pablo had said he had a “big surprise” for winner Nikki Ferrell since the beginning of the three hour event.  Juan Pablo stared at Chris, confused, and said “I don’t have a surprise.”  If looks could kill, Chris Harrison buried Juan Pablo six feet under last night.

According to E! News, Juan Pablo had actually told Bachelor producers he planned to propose to Nikki Ferrell on the live After The Rose Show, they even had a Neil Lane engagement ring on stand-by for the Bachelor.  In a bizarre change of events, Juan Pablo ditched the proposal plan at the last minute, and didn’t bother to tell Chris Harrison or any of the Bachelor producers.  Which, undoubtedly left Harrison furious since he had teased the audience and viewers at home about Juan Pablo’s “big surprise” for two hours before Juan Pablo took the stage with Nikki.

According to E! News even the Bachelor producers think that Nikki and Juan Pablo’s relationship is a sham.  Not only did he ditch the engagement plans, Juan Pablo refused to even say that he loved Nikki Ferrell.  An insider told E! News that “No one left the taping thinking this relationship is going to last.”  It’s probably for the best that Juan Pablo decided not to pop the question last night, since the odds of their relationship lasting more than a month are slim to none.

Did you catch the horribly awful After The Final Rose show last night?  Feel free to rant about it in the comment section below.