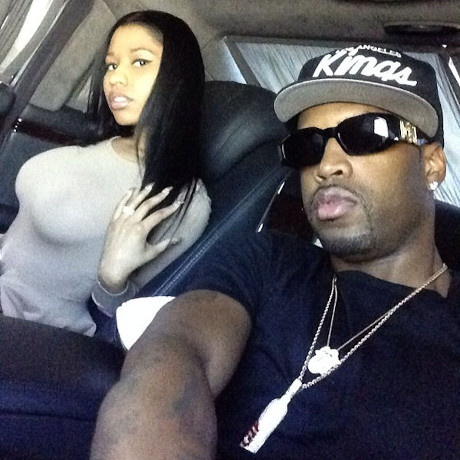 A lot of people don’t realize that female rapper and sex symbol Nicki Minaj has a very serious boyfriend, and no it’s not Drake or Lil Wayne like all the tabloids wants you to believe.  Nicki has been dating Safaree Samuels for over ten years.  He has been by her side since before she signed with Young Money and began her rise to fame.

Rumors emerge about once a year claiming that Nicki and Safaree are engaged, or said their “I Do’s” in secrecy, but they never seem to pan out.  This time the marriage rumors may be the real deal though.

Nicki Minaj jetted off to Cabo last week with Safaree Samuels and few of the couple’s close friends.  On March 8th Nicki posted a photo on Instagram of her and Safaree kicking back in Cabo, and they both have huge diamond studded wedding bands on their ring fingers!  And, their blinged out rings even match.  If that doesn’t scream married, then I’m not sure what does.

Nicki has hinted a few times that she regretted changing her name to “Nicki Minaj.”  But, since she rose to infamy she didn’t want to change her name again, because that’s how fans recognize her and who they know her as.  On the bright side, if she tied the knot with her long-time boyfriend Safaree, then she has an excuse to change her name again.  Nicki Samuels just isn’t as catchy as Nicki Minaj though.

Do you think Nicki and Safaree got secretly married, and didn’t bother to tell anyone?  Check out the photo below and see the rings for yourself.