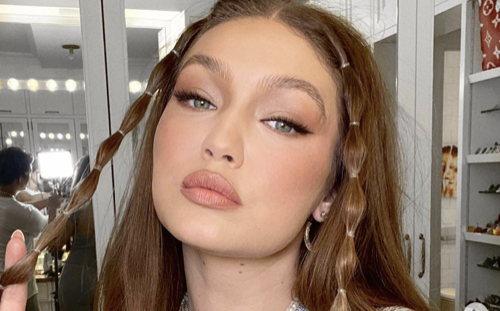 Kids…they grow up so fast. One day you are driving them around, attending playdates and ballet classes, and the next, they are baring all for “art” magazines and photo shoots. That is, if you happen to be Yolanda Foster of the Real Housewives of Beverly Hills, who has seen more of her daughter Gigi Hadid’s naked body recently than most mothers could stand.

Yes, it seems like just yesterday Gigi, 18, posed topless for a spread in V Magazine. The sexy spread in V magazine came shortly after her debut spread in the Sports Illustrated Swimsuit Issue. Now, she’s gone one step further. Radar Online reports that Gigi, girlfriend of singer Cody Simpson, goes completely bare in her most recent shoot where she is riding in a luxury train, with her backside on full display for an upcoming issue of a fashion and art magazine, VMan.

Hadid’s goal is to make it as a serious fashion model in New York telling VMan, “The big city has really been a place where I feel like all my dreams are at my fingertips. If I work hard enough, I hope to accomplish as many of my goals as possible here.”

Mom Yolanda is proud of her daughter’s success, often tweeting about her modeling projects, and even sharing photos. While many think Gigi is too young for the risqué shoots, Yolanda has no problem with it, referring to the teen as “my gorgeous baby girl.” The word “baby” really stands out right about now. Tell us what you think! Is Gigi too young for these sexy pics?