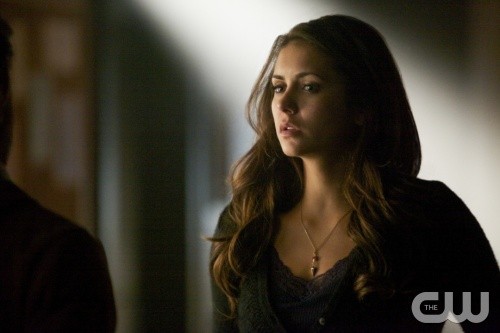 The Vampire Diaries season 5 episode 16 “While You Were Sleeping, ” opened with Elena is dancing on a bar coyote ugly style and her friends are watching. Matt wants her to take it off and so she takes of her shirts one by one. Caroline, Bonnie, Matt, and Elena raise a shot glass to their friendship. Elena questions if she’s super easy to mimic or of her friends just don’t really know her, Elena wants to know just when they would think she would ever dance half naked on a bar with her not old enough to drink brother there to see it all. Elena explains that Katherine is inside of her doing all these non Elena things. Elena wakes up inside her room at the dorm. I wonder if that was a legitimate memory of something that took place when Katherine was inside her or if it’s just a nightmare.

Elena decides to go adventuring and heads out of her room and down the hall. Elena calls out hello but no one answers. Elena notices all the other rooms down the hall or empty. Stefan just shows up out of nowhere. Elena ask him why he is there and where in the world in everyone else. Stefan tells her it’s spring break, well,that explains it. Stefan also tells her she has been out of it since she got her body back. Elena can only go so far and then a magic seal prevents her from going any further, she is stuck in the dorm. Stefan tells Elena they have some catching up to do.

Elena tells Stefan the last thing she remembers is running away from Katherine and the falling into Damon’s arms. After that it’s just one big blank. Elena knows she’s was infected with the ripper virus and is a Vannibal but that she she feels just peachy with a side of keen. Elena wants to know who sealed her in the dorm, Stefan tells her a girl named Liv. Stefan tells Elena she will be given a little vamp blood here and there to sustain her. Elena naturally wants to talk to Damon.

Damon is still being held prisoner in the cell in his basement. Damon grabs a cup of blood, drains the cup and the proceeds to hurl it at Jeremy. Jeremy gets angry and tells,Damon to go f himself. Damon does not want Matt and Jeremy to let the cat out of the bag to Elena that he kind of sorta killed Aaron. Damon is determined that he be the one to tell her. Speaking of telling her Elena calls Damon’s cell right then. They reluctantly and somewhat unwillingly give Damon his phone and then leave so he can talk to Elena in private. Damon jokingly ask if she has eaten anyone yet. Elena tells him she has had zero symptoms thus far, but she is being kept locked up nonetheless. Elena brings up the fact she lost three weeks of memories and then gets straight it the point and ask Damon just exactly how did Katherine break up with him when pretending she was her, what she really means is how could you fall for that you idiot. Damon lies and tells Elena he doesn’t remember. She apologizes, for what I’m not exactly sure. Elena says the last thing she remembers is being in his arms. Damon tells her everything pretty much goes to hell after that. Elena wants to know how she gets cured.

Caroline is listening to Maxfields notes, Enzo comes breezing in and introduces himself to Caroline. Enzo just happens to have overheard the recording and is shocked to find out that werewolves actually exist. Enzo attempts to flirt with Caroline, she tells him to hit the road. Enzo explains to Caroline he is there to do the same thing she is, to get rid of the Vannibal virus. Caroline thinks Enzo is lying and just wants his murder buddy back so they can go on another spree. Enzo tells her that Damon warned him she was critical but that she was also turned on by accents. Caroline tells him to zip it ,lock it, and put it in his pocket, and while he is at it to stay the hell out of her way. Enzo informs Caroline he has the antidote. Caroline drops the condescending attitude for a minute.

Stefan walks in and Elena hangs up with Damon. Elena almost face plants, she isn’t feeling to good. Stefan has the cure for what’s ailing her and he gives her a bottle of his blood, she opens it, and without a second thought chugs it down. Elena ask him for more and Stefan refuses. To prove his point he bites his wrist and holds it out to her? Elena goes all Vannibal and rushes at him. Stefan tells her she is not okay. Elena can’t believe that Katherine would turn her into a monster. Stefan informs if she were free she would drink until she kills. Elena thinks it’s her fault by being nice enough to sit with Katherine when she was dying.

Caroline calls Stefan and tells him there is a cure but he will need to get it himself, she tells him travelers are involved and then tells him she will text him the address.

Elena tries to get ahold of Aaron but of course she doesn’t. Elena leaves him a message asking him to call her. Elena then picks up her diary and sees that Katherine made some entires of her own. Elena starts reading and comes across one describing how Katherine tried to seduce Stefan in the hotel room.

Caroline is arguing with Stefan about telling Elena that Damon killed Aaron,she wants to Stefan does not. Enzo being a stand up guy offers to do it. Sloane and a bunch of other travelers show up. Enzo tells Sloane that he allowed Maxfield to experiment on him in order to find a cure for the virus. Sloane explains that Elena is very important to them and that they are trying to find the strain that she has, it’s very different from Damon’s. Sloane tells Stefan that he needs another one of them. So either they need a volunteer to be a guinea pig or they want another doppelgänger, not sure which.

Elena is talking on the phone with Damon and informing him that her Vannibal virus has werewolf blood in it and she is not doing so hot. Damon wants to come see her. Elena nixes the idea because she is afraid they would end up killing each other. Elena ask for a distraction so Damon tells her about Caroline sleeping with Klaus and Tyler throwing a lame party. Elena wonders if Tyler knows about Caroline and Klaus’s hook up. Damon tells her indeed he does thanks to Katherine. Elena starts coughing uncontrollably and it brings up blood. Elena ask Damon why Stefan just doesn’t make Maxfield make a cure. Damon tells Elena that he killed him.

Enzo hears from the travelers. They tell him that there are three doppelgänger’s and they need to kill one so there will only be two and then they will have the cure. Which to me makes no sense what so ever.

Elena is so sick,she is falling all over the place. Elena text Stefan hoping for a update. Elena falls up against the wall in pain. When she looks up she sees Aaron. Elena tells him she thought he was on spring break, and that she is really sick. Elena wants to talk to him and tells him what’s going on with her. Elena realizes his dorm room is cleared out and she ask him why. Aaron explains he isn’t really there. When Elena looks at him again she sees that his throat has been ripped out. Elena freaks out and begs him to tell her that she didn’t kill him. All of a sudden there’s a guy in front of Elena and he picks her up, he refers to her as a lush. Luke is his name but Elena doesn’t remember him. Luke thinks she is hammered. Elena notices the vein in his neck, Elena compels him to stay put, she bites his neck, she is about to break it and finish him off when she sees two other bite marks, Elena realizes that Katherine had been drinking from him. Elena compels him to find Caroline and have her send Bonnie. Elena knows she has to get out of there.

Caroline tells Stefan that the three of them can kick some traveler ass but Stefan would rather cooperate and help Elena. Stefan ask for the cures but they won’t give them to him. Enzo says he will take them, he ask Caroline if she would like to come with. Caroline opts to stay with Stefan. Sloane slices Stefan’s palm and starts to chant. Stefan screams in pain.

Meanwhile Sloane has gotten into Stefan’s head and finds out his doppelgänger lives in Atlanta and is a EMT. Sloane says the doppelgänger has to be killed and she starts to chant. Caroline grabs a knife and holds it to Sloane’s neck. Sloane tells her if she harms her the travelers will kill them. Caroline offers Sloane a deal.

Elena is falling down all over the campus taking what looks to be some of her last breaths, seriously girl looks like a hot mess. She thinks she sees Aaron but it’s Damon and he gives her some blood to drink. Elena tells him that Katherine turned her into a monster. Damon hugs her and Elena cries that she killed Aaron and breaks free. Damon admits he is the one that killed Aaron. Enzo shows up with the antidote but says it seems like they would rather be dead.

Caroline is with Stefan when he wakes up and he calls her Rebekah. Caroline freaks out and Stefan tells her he is just kidding. Enzo shows up and Caroline explains to Stefan that she made a deal with Stefan that she would kill his doppelgänger. Caroline tells Stefan he would do the same thing for her. Stefan tells her not to trust Enzo. Caroline says she won’t. Which means within the next few episodes she will have slept with him.

Bonnie apologizes to Liv. Liv is just excited she survived her first vampire encounter. Liv wants Bonnie to continue helping her with her magics. Liv goes into her room and lights every candle in there with a wave of her hand, faker, she has been playing Bonnie this whole freaking time. Liv isn’t to happy when she sees Luke is there, he reminds her that he is her brother and can be there if he chooses. Luke wants to know how the anchor is, Liv tells him Bonnie thinks she is teaching her magic. Liv tells Luke she thinks it’s cute. Luke tells her it will be cute when Bonnie finds out how much danger her friends are in.

If you need to find out what is going to happen on next week’s episode, our sister site Celeb Dirty Laundry has spoiled the episode with some teasers and a sneak peek video of next week’s show called, “Rescue Me.”