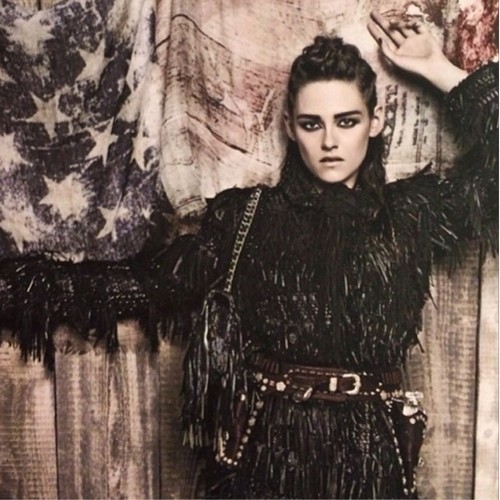 In December 2013 it was announced that Twilight alum Kristen Stewart would be the face of Chanel’s Dallas-Paris fashion line.  No one thought too much of it, K-Stew is a super star and some people consider her pretty, this isn’t her first ad campaign and most likely won’t be her last (rumor has it she may be currently working on a deal with Nike).

I don’t think anyone realized what exactly Chanel’s Dallas-Paris line would consist of though, especially Kristen Stewart or she may have reconsidered.  Photos of Stewart modeling for the Dallas-Paris line were leaked on Instagram today, and general consensus is (never thought we would actually say this) Stewart actually looks better dressed as a grungy and butch hipster.  Prairie dresses and “Cowboy Chic” are not Stewart’s strong suit.

There are a total of five photos of Kristen modeling the Dallas-Paris line, and each one boasts either fringe, fur, or both.  I’ll be the first to admit that with the right make-up and lighting, K-Stew does have the face for high-end fashion, she proved that in her Balenciaga campaign. But, the “cowboy” look is a tough one to pull off and to put it bluntly-Kristen Stewart can’t pull it off.  In the Chanel photos Stewart poses in cowboy boots, unshapely prairie dresses that resemble the American flag, a long ruffled skirt, and one outfit made entirely of fringe.

Check out Kristen Stewart’s Chanel Dallas-Paris ad campaign photos for yourself and let us know what you think about her new look in the comment section below.  Love it or leave it?