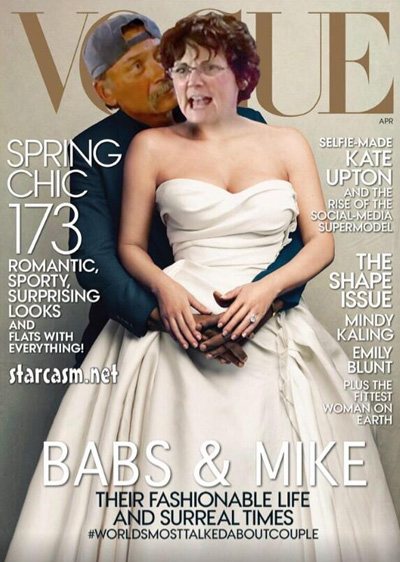 The world is still buzzing about Kim Kardashian and Kanye West’s Vogue cover, but there’s a new power couple gracing the cover.  And, if you ask me they do it SO much better.  Check out Teen Mom 2’s Jenelle Evans hilarious Mom Barbara, AKA “Babs” and her hubby Mike on their own Vogue cover.  Anna Wintour has dropped the Vogue cover standard to a ridiculously new low with her Kimye cover, Babs and Mike getting their own Vogue cover really isn’t that far-fetched.  If I was waiting in line at the grocery store and seen them on the cover of Vogue, I would totally grab a copy!

For those of you who don’t follow Teen Mom 2, Barbara Evans is hilarious!  Not only does Jenelle’s Mom raise her son Jace for her, she also juggles a full time job at Walmart.  If anyone deserves some recognition, its Jenelle’s Mom Barbara.  She has put up with Jenelle’s multiple arrests, multiple pregnancies, multiple boyfriends, multiple fiancés, and multiple scandals.  In Season 4 of Teen Mom 2, Jenelle even drover her boyfriend Kiefer Delp to the police station and waited for him while he went inside and pressed charges against Mike and Babs for breaking into Jenelle’s apartment and throwing away their heroine stash.  Who presses charges against their own parents?

On a scale of 1-10 how in love with Babs and Mike’s Vogue cover?  If Kim Kardashian – a reality star whose claim to fame was a sex tape, can land the cover of Vogue, then there is no reason Jenelle Evans’ Mom Barbara can’t!  Right?