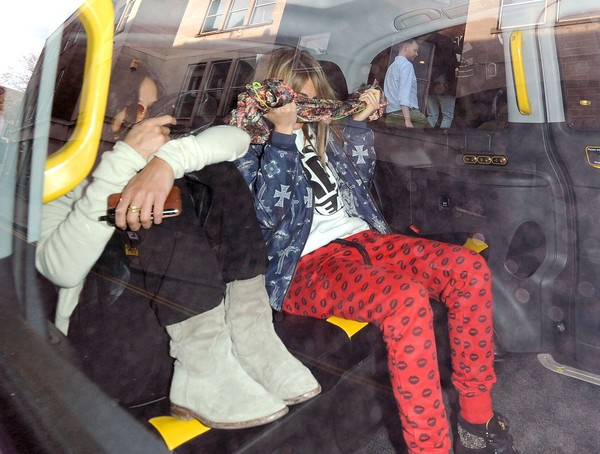 In January supermodel Cara Delevingne and actress Michelle Rodriguez (Fast and the Furious) took the cake for most random celebrity hook-up to date, when they were caught on camera partying hard at a basketball game, and all over each other.

In February they made news again when they both drank a little too much at an event, and allegedly had a hot and steamy hook-up in the limo afterwards. Michelle was photographed climbing into the limo with Cara in a pair of white pants. When the limo arrived at their next destination, Michelle emerged from the limo in a long trench-coat, completely nude underneath. And, she was followed by Cara who was carrying the white pants she was wearing when they were getting into the limo. No one knows for sure how Michelle lost her pants en route to their next party, but one can definitely assume.

Cara and Michelle remained mum on their relationship, and fans speculated they were simply hook-up buddies, and their publicized romps were the results of way too much partying. But, today Cara and Michelle laid rumors to rest when they were photographed on vacation together in Cancun, Mexico. The model and actress were rolling around on the sandy beach together, holding hands and kissing, and completely sober.

It looks like Cara Delevingne and Michelle Rodriguez are very into each other, and their relationship is still going strong. How long do you think Cara and Michelle’s relationship will last?