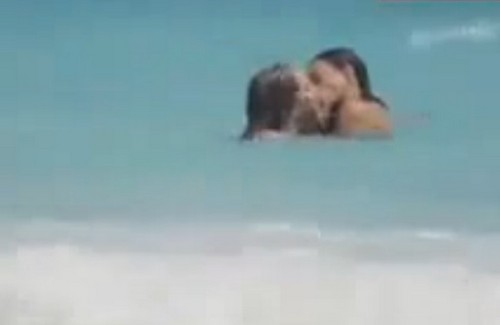 Have you ever fantasized about a topless supermodel and a badass action movie actress making out in the cool, crystal blue ocean?  Well, if you happened to be in Cancun, Mexico last weekend then your dreams would have come true.  Supermodel Cara Delevingne and actress Michelle Rodriguez (The Fast and the Furious) shocked onlookers in Cancun when they went for a dip, kissed and groped each other, and then Cara bounced up and down on the waves topless.  Yes, this all really happened.  Check out the video courtesy of The Sun below.

Cara and Michelle put on quite a show back in January when they were photographed completely inebriated in their court-side seats at a basketball game.  Cara and Michelle had both openly confessed they were interested in girls in the past, but no one ever expected them to hook up with each other.  Most random celebrity hook-up…ever.

The media continued to speculate whether Cara and Michelle were just drunken hook-up buddies or were actually in a serious committed relationship, and were “girlfriend and girlfriend.”  Hooking up in the backseat of a limo in February, also after a heavy night of drinking, resulted in Michelle Rodriguez literally losing her pants, and another tabloid firestorm.

The plot thickened last weekend when Michelle and Cara vacationed together in Mexico.  On Saturday photos were leaked of the couple romantically gazing into each other’s eyes, rolling together in the sand, and kissing… a lot.  And, now The Sun has released this steamy, and borderline soft-porn video of the model and actress in the ocean together. Do you think Michelle and Cara are just hooking up?  Or could they really be girlfriend and girlfriend?