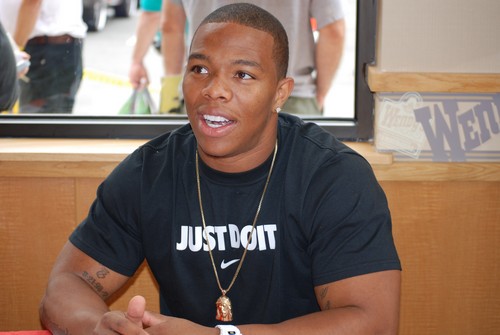 You may remember reports of Baltimore Ravens’ RB, Ray Rice’s alleged assault on fiancé Janay Palmer on February 15, where he was seen dragging her limp body out of an elevator in an Atlantic City casino. Unfortunately, his fiancé must not remember the dramatic night because no one in their right mind would marry someone who abused them, right? Wrong. In fact, Janay married Rice just one day after he was indicted for the assault.

Rice was charged with third degree aggravated assault. A description of aggravated assault can be found on Nolo.com (a legal encyclopedia)defined as, “Aggravated assault is a felony that may involve an assault committed with a weapon or with the intent to commit a serious crime such as rape. An assault may also be defined as aggravated if it occurs in the course of a relationship that the legal system regards as worthy of special protection.”

Many may think Rice forced Janay into marrying him as a form of protection so that, as his wife, she would not be forced to testify against him. Well, hopefully he did his homework and understands that “spousal privilege” does not apply in this case. As TMZ shared, “In New Jersey, (and many other states) spousal privilege does NOT apply if the alleged crime was committed against your spouse.” So, from the sounds of it, Janay is just simply crazy and wanted to marry Rice.  Imagine their registry…lots of ice packs, bandages, sunglasses, concealer. Good luck with that, Janay.