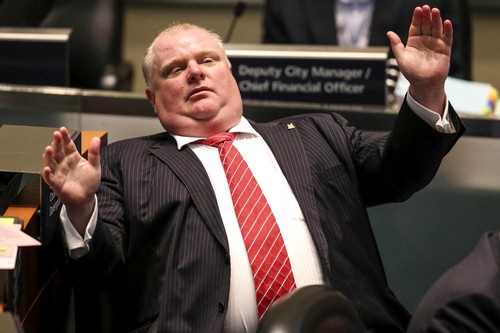 As if we needed another reason to hate Rob Ford, Toronto’s cracked out embarrassment of a Mayor. According to reports, Ford has voted ‘no’ about the city of Toronto officially congratulating Canada’s Olympic and Paralympic athletes.

He was the only one on the city council that voted ‘no’, which shouldn’t actually be all that surprising. Apparently, minutes earlier, he was also the only one to cast ‘No’ on the vote to name a Toronto street after Nelson Mandela.

Ladies and gents, here’s Mayor Rob Ford, your official party pooper. What’s even more interesting that he quickly realized that the backlash was coming, and he tried to change his mind a half an hour later. He reportedly tried to ask for a re-vote on both counts, explaining, “We all make errors. I guess I pushed the wrong button. Of course I support Nelson Mandela.”

He claims that he was stretching his back and voted quickly, and thus wanted to be given the chance to vote again, adding that of course he supported Canada’s Olympians and Nelson Mandela. But the request for a recount was denied, as it should be. Rob Ford’s excuses get more pathetic as time goes by, and it’s obvious that he was embarrassed that he was the only ‘no’ vote both times and that’s the only reason he wanted to change his vote.

There are also reports that confirm that theory, with city counselor Adam Vaughn explaining, “Everyone when he did it said, ‘What are you doing, Rob?’ He shrugged his shoulders and let it go. And then a half-hour later, not immediately, a half-hour later, when Twitter and social media went off the charts, his staff came and said, ‘You better fix this. You look like a fool.’ Because you know what? He is one.”

But you know what? Rob Ford’s delusions know no boundaries. Even after everything that happened this past year, what with the drinking and crack smoking, he’s seeking re-election. As IF everyone’s going to vote him back in. What a complete and utter idiot.