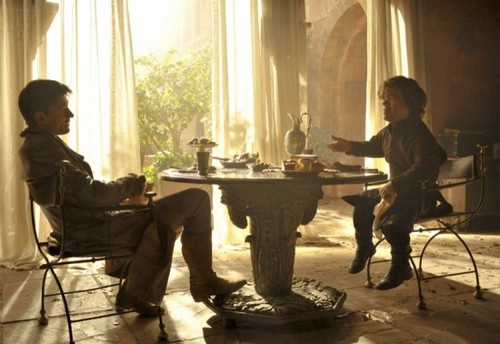 Game of Thrones Season 4 premiere opened with the image of a sword, the Valyrian sword of Ned Stark . Twyin gives it to a blacksmith who after a hammer here and a hammer there gets it up close and personal with his fire. Its melted down and used to make “two swords” which is where the title of this episode comes into play. Tywin also throws the fur it was wrapped in into the fire, which as far as I can tell is a dig at the fact that the Stark family insignia is of a wolf. The music from the “Red Wedding” from last season is also playing in the background. Should have been Hail to the King by Avenged Sevenfold, simply based on the fact that every time I hear that song I think of this show.

Jaime is given one of the swords by Twyin. Twyin attempts to talk Jaime into returning to Casterly rock while Tywin himself stays with the King, but Jaime scoffs at the idea and he is going to remain in King’s Landing. How long do you think he has got before that bites him in the ass? Also of note this is the first time I recall Tywin and his children all being in the same place at the same time.

Speaking of children Tyrion is up to bat. Tyrion has essentially been given the task of keeping Prince Oberyn Martell happy, which as far as I can tell is an impossible task since he has only vengeance on his mind when it comes to the Lannisters clan on the eve of Joffrey’s wedding. Apparently his sister Elia was murdered by the Lannisters most notorious evil doer, which Oberyn has no problem recounting for Tyrion “What I keep hearing is that Gregor Clegane, ripped Elia and split her in half with his great sword. Oberyn who of course is just out for blood and vengeance and could careless that Tyrion had nothing to do with his sisters death and tells Tyrion to “Tell your father I’m here. Tell him that Lannisters aren’t the only ones who pay their debts.” Sounds like a threat to me.

Daenerys is relaxing on a cliff next to the sea and petting one of her growing dragons she watches as two of them fly through the air with the greatest of ease. One of the dragons brings back some food and they proceed to fight over it. Deanerys gets snapped at by one and she is stunned, kids always snapping at their parents.

Tyrion goes to see Sansa, she apparently is on a hunger strike. Tyrion wants to “help her” however he can. Sansa tells him that she stays awake all night, unable to sleep, hunted by the the memories of Rob’s and her mother’s gruesome deaths. Tyrion tries to give her comfort, Sansa says to hell with that and admits she doesn’t want any help, she would rather go to the church, Sansa says that she doesn’t pray but it’s the only place she can go where people don’t bother her.

Tyrion then heads over to see Shae who I will wager is and will be the only person happy to see Tyrion this entire episode. Shae wants to know why Tyrion was planning to ship her off and away from Kings Landing. Tyrion has no idea what she is talking about.

Jamie would like to have a chat with Cersei, Jaime calls her on the fact that she has become quite the lush and then admits that his daddy told him to shove off. Jaime wants to have a ummmmmm touchy feely interaction with Cersei, but she is having none of that or his advances, Cersei is mad that he left her, she could give a damn if the circumstances in which he left her were beyond his control. He left her for too long, everything’s changed. A young lady runs to Cersei. She is all about the gossip and plans on telling her everything she heard said between Tyrion and Shae.

Jon Snow who will never get the respect he deserves is up next and he is being questioned by the council for “running his sword through a man of the Night’s Watch.” Jon also admits to sleeping with a Wildling girl. Jon tells them that they can execute him if they want, which I doubt they will.

Joffrey who amazingly is still acting like quite the cocky bastard tells Jamie that he has won the war. Jamie who is much wiser, what with his new gold hand and what not corrects Joffrey and tells him the war is not yet won.

Sansa is walking through the Godswood. Dontos comes to find her. Dontos wants to thank her for saving his life and offers her a beautiful necklace that belonged to his mother. House Hollard was strong once. House on the rise Dontos tells her this is all that’s left of those days, thanks to a few sad fat drunks like him. I don’t have anything left. That’s all. Take it, wear it. Let my name have one last moment in the sun before it disappears from the world. first, Sansa doesn’t accept it right away, but after Dontos insists, she agrees. Sansa tells him she will wear it with pride.

Arya who is with the Hound sees Polliver with her sword “needle is it’s name and killing the people who piss her off is its game.” Arya heads on over to get it and because it is the Hounds job to protect her he has no choice but to follow. They head into the bar and have a seat. Polliver the guy who took Arya’s sword and then proceeded to kill her friend Lommy Greenhands sits down next to the Hound. Polliver wants the Hound to come with him. The Hound tells him he isn’t going to Kings Landing or as the Hound so eloquently puts it “fuck the King.” Polliver looks at the hound with mouth agape.

In a mere matter of seconds Arya and the Hound have started a fight. No worries though once Arya gets her sword back she starts slicing through people like their butter. Arya gets to Polliver and says to him , Fine little blade. Maybe I’ll pick my teeth with it. Arya stabs him in the throat. Who says no one ever pays the price for their dirty deeds on this show. With that the Lannisters have been put on notice.

The Hound and Arya are riding off when she tells him that she won’t run off simply because she has no where or anyone to run to anymore. I’m worried for our little Arya.

If you need to find out what is going to happen on next week’s episode, our sister site Celeb Dirty Laundry has spoiled the episode with some teasers and a sneak peek video of next week’s show called, The Lion and the Rose.”
Continue Reading