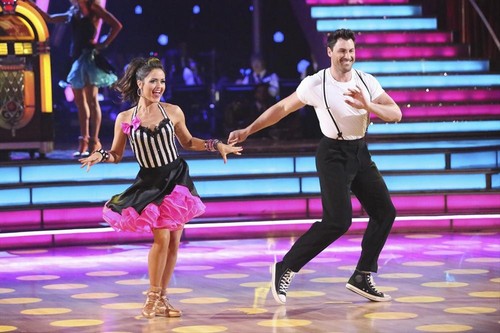 As part of Season 18 of Dancing With The Stars latest twist, Julianne Hough appeared on an all new episode of the dancing competition last night.  The former DWTS dancer wasn’t dancing though, she actually appeared on last night’s show as a guest judge-joining Carrie Ann Inaba, Len Goodman, and Bruno Tonioli.

Guest judge Julianne Hough wasn’t the only twist last night on Dancing With The Stars though, there also was a dance partner switch up.  As a result of the loathed DWTS contestant Switch Up, brothers Maksim Chmerkovskiy and Val Chmerkovskiy swapped dancing partners.  After Maksim and his new dance partner Danica McKellar performed a jive together for the first time, guest judge Julianne Hough called Chmerkovskiy out on his performance.  Julianne stated Maks treated Danica unfairly and didn’t put half us much effort into his dance with her than he did with his previous partner Meryl Davis.  She said, “I always felt like Maks you were like Mark.  I felt like you just wanted to get by so you could get back with Meryl. ”

After her appearance on Dancing With The Stars Julianne Hough told E! News, “I felt like this was lolly-gagging.  I was like, that’s not fair for Danica. I wanted to see more of her dancing, I mean, that was where I came from. It was not to be malicious at all.”  Regardless of whether Hough intended to be malicious or not, Maks didn’t appear too impressed.  After Hough slammed his jive during the episode, E! News questioned him about it.  Maksim didn’t have much to say, “I think it’s a matter of opinion and people give theirs and it is what it is.”

Do you think Julianne Hough was a little harsh on Maksim after his performance with Danica McKellar?  Or, do you agree with Julianne and think he did a much better job when he danced with Meryl?  Let us know what you think in the comment section below.

Check out their performance below!