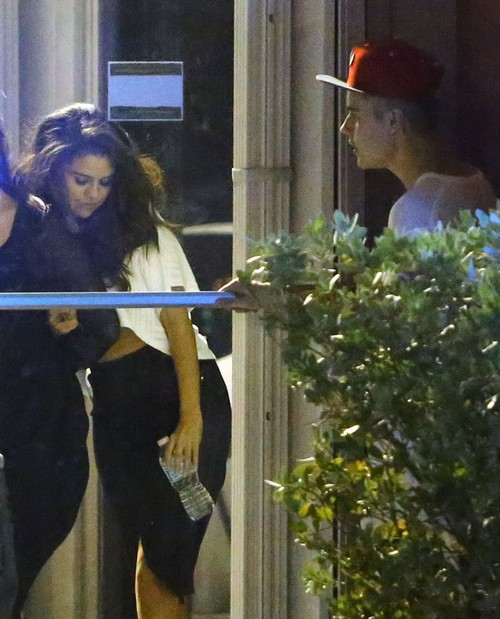 Again? Yes, once again, Justin Bieber and Selena Gomez have been spotted together in Miami. While it may be touted as business by the terrible twosome, we would not be surprised if this is more pleasure than business. The couple is apparently working on a duet titled, “Unfamiliar,” but given their inability to break away from this dysfunctional relationship, it seems they really are not too fond of things “unfamiliar” and are far more comfortable with old habits.

The scary part of their late-night studio date was the fact that Selena was very unsteady on her feet. TMZ reports that Selena had help walking into the Hit Factory as she grabbed on tight to a woman’s arm. However, the video of Selena as she walks into the studio shows that as soon as Selena breaks away from the woman, she is unsteady and even has her eyes closed as she walks in! The woman breaks from her and walks away from the studio. Selena seems to be holding on to what appears to be a water bottle. Justin and his hangers-on wait for Selena as she walks up to the studio, then quickly close the door behind her.

As HH reported previously, Selena’s parents have been worried about her fragile state and recent reckless partying. They feel Justin is a threat to their daughter and are desperate for her to get help. It seems, however, that not only is she addicted to self-medicating, but to her former flame as well. What do you think HHers…business or pleasure??