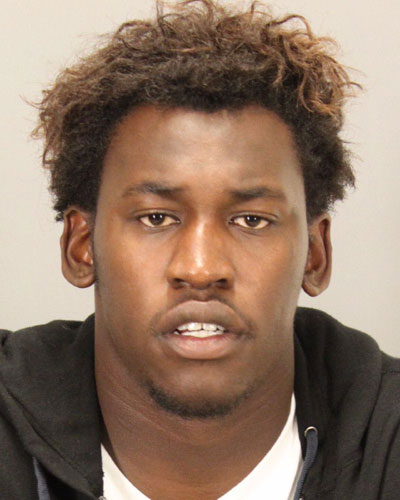 Aldon Smith, 24, must have had a game plan for getting arrested today because the San Francisco 49ers linebacker yelled “bomb” after being randomly asked to allow security at the gate at LAX to do a secondary screening.

Many are speculating that Smith may have imbibed a bit too much before his flight. The troubled player was previously arrested for a DUI and voluntarily checked into rehab three days after receiving his second DUI since 2012, reports ESPN.com. He was volatile, belligerent, and uncooperative with TSA agents, and later with police. Police say it was when Smith was asked by TSA agents to do a second screening that he became “belligerent and uncooperative with the process and with the TSA agent making a comment indicating that he was in possession of a bomb before proceeding to the gate area,” TMZ reports. He was later overheard telling police that he had done nothing wrong and insisting the cops arresting him would be “embarrassed.” Shortly after, he was transported to a nearby LAPD station for booking.

Smith has had even more brushes with the law and is still facing charges stemming from a violent incident which took place in his San Jose, California home where he was subsequently charged with illegal possession of an assault. Smith won’t be able to talk his way out of this one, either. Many witnesses videotaped the entire incident. Looks like Trent Baalke, who released a statement about the team’s disappointment in learning of the incident, has surely had his hands full lately as Colin Kaepernick is currently being investigated for sexual assault.