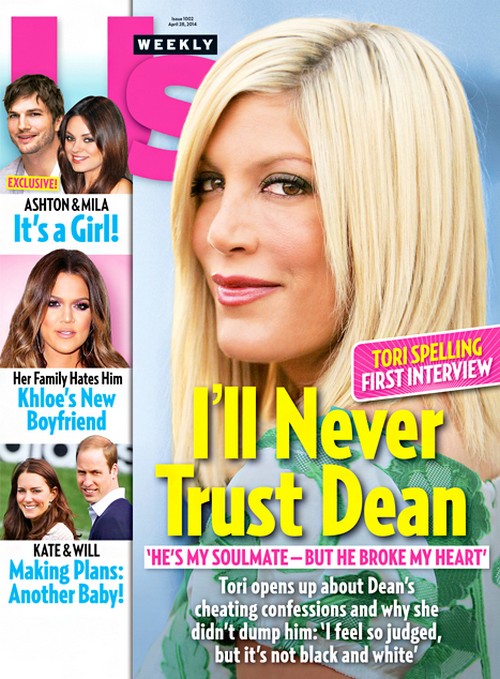 Tori Spelling and Dean McDemott aren’t in the best of places right now. Their marriage woes will be documented on the upcoming Lifetime reality show, ‘True Tori’. However, Tori herself has given an exclusive interview to US Weekly about her marriage, and her feelings on Dean’s well-publicized affair with another woman.

She reveals, “He was my soulmate, but he completely broke my heart. It makes you not trust anything that’s happened in your relationship.”

Of course, we’re about to learn a lot more about what happened when Tori’s and Dean’s marriage troubles are shown on Tori’s show. On her decision to air all those intimate details on television, Tori explains, “I feel so judged, but it’s not black and white.”

Well, of course, but there’s also the fact that Tori Spelling hasn’t been relevant in a long, long time – and this show finally allows her a chance to get back onto the public’s radar, albeit in a somewhat humiliating manner.

Friends of Tori’s also claim that she desperately wants to embarrass Dean on television, the way he embarrassed her by publicly cheating on her. See, Dean’s probably been cheating on her for many years, and there’s no way Tori didn’t know that. But this is the first time he’s been caught so red-handedly, and she’s going to make him pay for it.

Right now, Tori reportedly doesn’t think that she and Dean are back together, but is letting him live in the house for the sake of their children. Keep in mind, too, that we’re only hearing Tori’s side of the story right now. No doubt, when the show finally does begin airing, we’ll get a better picture of the whole situation – if we watch the show, that is.

Are any of you guys planning on watching the show? Let us know your thoughts in the comments.