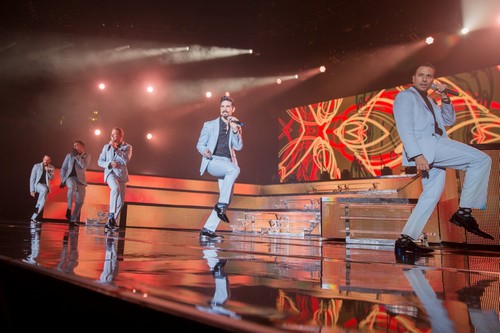 Uh-oh, looks like boyband drama. Have we gone back in time to the 90s? According to reports, Nick Carter and Joey Fatone are embroiled in the 2014 version of ‘He said, but then he said’. Apparently, Joey claimed during a recent interview with HuffPost Live that the Backstreet Boys are only going on tour because they needed the cash. However, Nick is now hitting out against Joey for saying that, using Twitter to dismiss Joey’s comments.

He wrote, “Just disappointed, I really liked Joey… I’m proud of who we are and love what we stand for. Truthfully its about not letting our fans down. Sorry bro but you have us all wrong. Now let me go back to enjoying my Honeymoon.”

Isn’t this weird? Don’t they discuss this with each other beforehand? Like, wouldn’t they go over their united public statement over their reasons for getting back together and going on tour? Because now, there’ll just be a lot of awkward moments between Joey and Nick when they finally do reunite and go on tour.

Also, I find it off-putting that Nick would take to Twitter to air his complaints instead of calling Joey directly. It just makes me think that everything they do is just one gigantic publicity stunt, which it honestly might be.  Can you put it past them? Does anyone care about the Backstreet Boys anymore? I mean, really care, not just in a nostalgic, ‘Oh I miss them’ kind of way?

What do you guys think? Let us know your thoughts on Joe’s and Nick’s ongoing feud in the comments below.