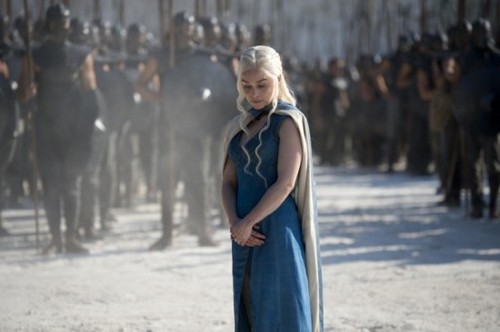 Game of Thrones Season 4 episode 3, “Breaker of Chains,” opened and Joffrey is still dead. Cersi who is cradling Joffrey’s dead body in her arms barks out orders to the guards to arrest Tyrion and Sansa. Oddly enough no one can find Sansa. I’m pretty sure that’s due to the fact that she has taken of with Dontos onto a ship so she can get out while the getting is good. They row out into the middle of Blackwater and get on a boat. Come to find out Dontos works for Little Finger. To my disgust and Sansa’s terror Dontos is met with a arrow from a cross bow to the face for his row row row your boat solid he did for Little Finger. Little Finger explains it was done to keep the secret of her fleeing. Little Finger also tells Sansa that everyone in King’s Landing is a liar. Like her necklace form Dontos for example, Little Finger made it himself a few mere months ago.Margaery and her grandmother talk about her horrible wedding debacle which is now known as the day Joffrey got what was coming to him, Olenna informs her granddaughter that she is better off without Joffrey. When you are right you are right. Olenna in fact tells Margery that her circumstances have improved dramatically and as far as that pesky alliance goes with the Lannisters Margery need not worry because as it turns out they are still just as important as they were before Joffrey took his big swig to the sky. As a added bonus she reminds Margery that the next one will be easier.

Speaking of the next one Tywin, Cersei and Tommen , you know the next one, are watching over Joffrey. Tywin ask Tommen what kind of king he needs to be, after a few failed attempts Tommen finally gets a clue and says he needs to be a wise king. Tywin is pleased. Twyin tells Tommen that wisdom is what makes a great king. Tywin says that a wise king knows what he knows and recognizes the things he does not. Tywin says that Joffrey was not a good king. Truer words….Tywin goes on apparently Joffrey wasn’t very bright either and if he had done what he was told then maybe just maybe he would still be alive. Doubtful very doubtful. In the end does any of this discussion make a bit of difference? This kid is next in line rather anyone wishes it or not. The fact he is so young and naive and no doubt easily manipulated will definitely make things easier for Margery.

Jamie comes strolling in to see Cersi and sends the guards away. Cersi is convinced that Tyrion did us the favor of ridding us of that horrible son of hers and she wants Jaime to kill him. Jaime to his credit refuses he can’t kill his brother, their brother. Then after a few beats Cersi and Jaime share a kiss, ewwwwwww. Cersi who I assume is just as grossed out as me ends the kiss and moves away from Jaime. Jaime who is probably used to getting what he wants informs Cersi that she is hateful woman. Way to catch up bro. Jaime then says what has got to be the dumbest thing I’ve heard on this show in awhile, he says the gods made him love a hateful woman. Before that can properly sink in Jaime puts Cersi on the ground and rapes her right there by their dead son. Her screams of stop falling on deaf ears. This show just jumps from one extreme to the next.

The Hound and Arya are traveling to Fairmarket, or so The Hound thinks he can’t be to sure though because for whatever reason he doesn’t have a map. A farmer and his daughter see them in the Riverlands and offer to let them stay with them and partake in a dinner of rabbit stew. The farmer wants them to stay with them until the next new moon to help him with his harvest. The man offers to pay them for their work. The Hound is extremely rude to the farmer but finally agrees to help after he hears about his hidden silver. When morning arrives Arya is awakened by a scream, the Hound has taken it upon himself to beat up the farmer and take the silver. Arya is understandably upset but no matter how hard she tries she can’t convince the Hound to return the silver. So glad to see Arya still has her humanity.

Stannis is downright obsessed with coming up with away to make sure he gets the throne. Stannis is determined he won’t become a page in someone else’s history book. Stannis believes Joffrey’s death is because of MelIsandre and he wants to attack Kings Landing. Davos is trying to help him come up with ideas but since good is scarce ideas are few and far between. Davos comments that he has never heard of winning a war anyway. Later when Davos is reading with Stannis’s daughter he gets a brilliant idea after she hands him a book on Braavos. Davos has Stannis’s daughter write a letter as if she were her father to the Iron Bank of Braavos.

Sam is extremely worried about Gilly remaining in Castle Black. So Sam does what any fool in love would do, he packs up Gilly and her little one and takes them to a brothel. Sam doesn’t want Gilly turning tricks however and so he manages to get the woman in charge of the best little whore house to hide away from Castle Black in to allow Gilly to simply cook, clean, and watch over the woman’s brood of children. Gilly doesn’t want Sam to leave but he is adamant that she will be safer further rather than closer to him.

Podrick comes to visit Tyrion in his prison cell and brings him food and something to drink. Tyrion wants to know what everyone is saying. Side Note: Tyrion doubts that Sansa is guilty, even though her disappearance is awful sketch. Tyrion tells Podrick the only person he believes is completely innocent of Joffrey’s murder is Cersi, which he admits makes it unique as far as King’s Landings murders go. Anyway Podrick informs Tyrion that he is facing a trial. Podrick also tells him that the judges will be Tywin, Mace Tyrell, and Oberyn. Podrick then tells Tyrion he was offered a deal to testify against him. Podrick tells Tyrion he did not take the deal. Tyrion tells Podrick to leave before it’s too late. Tyrion tells Podrick that if he stays he will be forced to testify one way or another. Tyrion makes Podrick swear that he will not die on his behalf. Podrick agrees to leave. Payne shows up at Tyrion’s cell. His trial will be in a fortnight.

Ygritte and the Wildings destroy a village south of the wall and kill everyone except one boy who is to carry the message of said murder and destruction to Castle Black. Jon knows that Mance has all he needs to destroy them, Mance just doesn’t know it yet.

THE END!!
If you need to find out what is going to happen on next week’s episode, our sister site Celeb Dirty Laundry has spoiled the episode with some teasers and a sneak peek video of next week’s show called, “Oathkeeper”