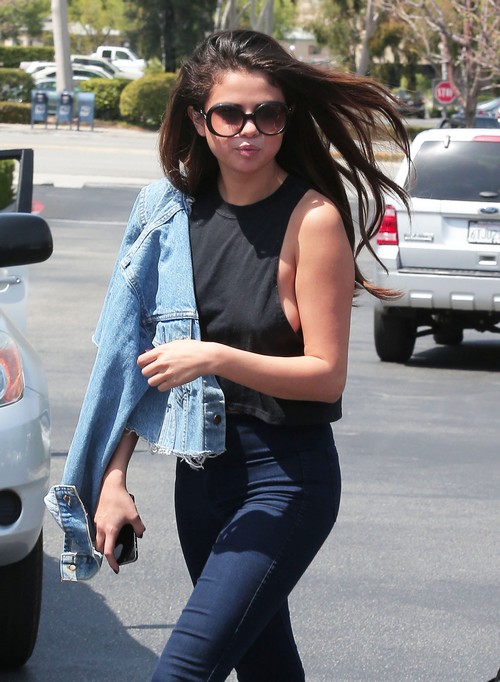 Selena Gomez is clearly struggling with a lot right now, and it obviously hasn’t been easy for her since she left rehab. She’s in a difficult position with her parents [who she fired], she’s in an on-again/off-again relationship with Justin Bieber, her supposed BFF Taylor Swift ditched her, and most of her true friends have abandoned her in her time of need. So she decided that the best way to retaliate would be to go on a mass deleting spree on her social media. Selena has unfollowed Kendall Jenner, Kylie Jenner, Taylor Swift, and Justin on Instagram. Talk about having an online meltdown huh?

We got a small glimpse into her state of mind earlier today when she uploaded several lyrics she’s currently working on, including, “I got love from my fans that adore me…But my love for myself is lacking a little bit, I can admit that I’m working on me.” At least she’s aware of it, and can admit that she needs to work on it. You know what they say – the first step to recovery is acceptance.

Anyway, it’s pretty obvious why she dumped the Jenners, Justin, and Taylor. Kendall and Kylie are horrid influences on everyone around them, and if Selena’s trying to get away from bad influences, the first people she’d need to cut from her life are the Kardashians.

A close second is obviously Justin, who’s been nothing but a negative influence on Selena’s life. He’s the reason she supposedly cut off her parents, and sources state that he’s also the reason for Selena’s relapse and rehab visit.

Finally, we have Taylor Swift. Taylor ditched Selena the minute that things got tough and Selena really needed her. Obviously, this is Selena’s way of retaliating against Taylor, and telling her that she’s a shitty friend. Honestly though, can you blame Selena? Aren’t supposed ‘best friends’ supposed to stick with each other through thick and thin, not ruin their friendship over a guy?

What do you guys think about Selena dumping her friends on Instagram? Do you think it’ll last? Let us know your thoughts in the comments below.