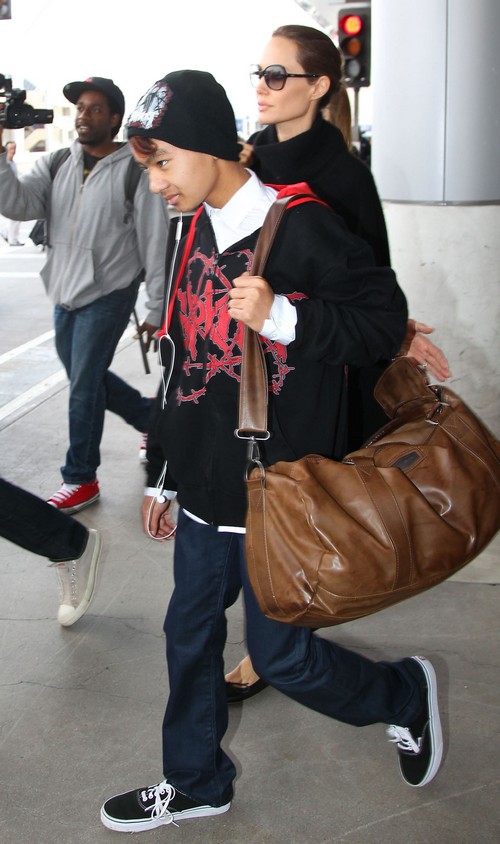 Any parent of an adopted child will tell you that there are constant complications as the child grows older and becomes curious about where he or she has come from.  And, according to OK! Magazine Angelina Jolie is currently experiencing this with her adopted 12 year old Cambodian son Maddox, and the actress is afraid that he may try to leave the Jolie-Pitt clan and reunite with his family in Cambodia.

A source told the magazine that, “Jolie has become worried because he’s talking a lot about traveling to Cambodia.  He spends hours on the Internet in an attempt to trace relatives. He says it’s his dream to be reunited with his real family.”  The source goes on to tell OK! that Maddox’s father Brad “reassuring Angie that what Maddox is doing is totally normal for an inquisitive kid.”

While OK! has a tendency to embellish a bit, it is very likely the Maddox is becoming curious about his native country and the relatives that he left behind.  The bottom line is, if Angelina is truly scared that he is going to abandon their family and run back to Cambodia, she has nothing to worry about, at least not for a few years.  Maddox is a twelve year old child, he isn’t going to pack his bags and move to Cambodia anytime in the near future.  Technically he can’t even legally do so until he is an adult, which won’t be for another six years.

Do you think that that it is possible Maddox would want to abandon is cushy and lavish lifestyle with Angelina Jolie and Brad Pitt and move back to Cambodia?  Let us know what you think in the comment section below.