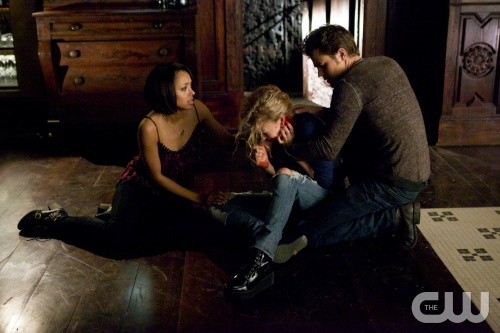 The Vampire Diaries season 5 episode 19 “Man Of Fire, “ opened with Elena has Stefan helping her study for her psych test. When Bonnie appears Elena informs her that Stefan is the tutor from hell. Elena wants to know if Bonnie is dealing with the fact the other side is falling apart. Bonnie points out to Elena that if the other side goes poof so does she. Bonnie is more worried about the fact the Travelers are going to take over Mystic Falls. Stefan tells Bonnie no need to worry Damon is all over that.

Matt and Jeremy are taking Lockwood Mansion apart room by room looking for for Traveler knife. I wonder why Matt isn’t in possession of it. Damon comes along and ask them to invite him in. They decline. Damon then says he needs the Travelers knife so to be good little boys and hand it over. Jeremy and Matt tell Damon they can’t find it. Damon is not happy to hear that one bit. It’s also at this point Damon finds out that Tyler is nowhere to be found courtesy of Matt and Jeremy, way to catch up fellas.

Tyler is all chained up and as he begins to wake up and panic Marcos calls for the Traveler Julian to take back over Tyler’s body. Once Julian is present and accounted for Marcos explains how their days of running are numbered. Marcos says they have loved to long without a home and it’s all because of a witches curse. While more Travelers gather they decide it would be a nifty idea to use Sloan as a sacrifice. Marcos slices her throat and she falls to the ground and that kiddies is the end of Sloan. At least in her human form.

Damon gives Enzo a ring asking Enzo for his assistance finding a Traveler since they have Tyler. Enzo respectfully declines he has places to go and people to interrogate and then torture. Enzo shows up at the bar where Stefan and company are. Enzo wants to have a cup of tea with them. Enzo brings up Maggie and that fact that she was murdered. Enzo thinks Stefan is guilty. Stefan tells him he didn’t do it and it wasn’t during his Ripper phase. Meanwhile Bonnie is asking Liv if she might have any witchy ideas on how to fix the other side. Oh and just for the record Liv does not like Enzo one bit.

Enzo request that Liv do that magical head thing to Elena and Stefan. Liv does so but only because Enzo has her brother Luke who is led in by vampires shortly after. Liv apologizes to Stefan and Elena for the whole hurting their heads bit. Enzo ask Stefan if he is ready to admit what he did to Maggie. Enzo has Elena and Stefan tied up and he is torturing two vampires with ropes covered in vervain not to mention holding the rest of the bar hostage. Enzo assures them he will let everyone go as soon as Stefan admits his guilt. Enzo is thinking about Maggie while he drinks. Luke wants to take Liv’s place but Enzo has no interest in that and has his two vampire goons take him away. Enzo shows Stefan one of Maggie’s journals and then he begins to read from it. Apparently Maggie was unable to find what she was looking for and came back to Whitmore looking for Enzo but then found out he supposedly died in a fire. Stefan tells Enzo by 1960 he was out of his Ripper phase. Enzo growing tired of Stefan’s denial calls up Damon and ask him to look for something in Stefan’s journals. Damon realizes what’s going on and ask Enzo why he is using his murder voice. Damon tells Enzo that Stefan burned all his journals. Enzo informs Damon that Stefan is the one that killed Maggie. Damon tries to tell Enzo it isn’t so but he hangs up before he can. Enzo looks up the night that Maggie died. It was the night JFK became the President.

Stefan starts having a flashback of that November night in 1960. Maggie walks over to Stefan while he is drinking from another girl. Maggie tells Stefan she knows all about him and Damon. Maggie tells Stefan she has been searching for Damon for awhile because he knew her friend Enzo who died in the fire. Stefan tells her that Damon is a monster and to stay way from him. Maggie informs Stefan she plans on killing Damon. Stefan admits he got upset and went a little vampire ish on her but that is all he did. Enzo grabs Bonnie by the throat and begins choking her. Enzo tells Stefan he is going to kill her. Stefan tells Enzo to stop and then confesses to killing Maggie, which is of course a lie. Enzo lets Bonnie go and has Liv take her upstairs. Upstairs Bonnie tells Liv that if Enzo kills Stefan or Elena the curse will never be broken and the witches will win. Liv confirms she already knows and that’s why she is helping Enzo.

Damon needs Caroline’s help and calls her he gets her voicemail. The Sheriff just happens to be wandering by and Damon ask her for her help. She gets the file for Damon. The murder as it turns out happened on November 8, 1960. Damon tells the Sheriff he knows Stefan didn’t commit the murder because he did.

Enzo has a flashback of Maggie asking him to turn her, she wants to be with him forever. Enzo bites his wrist and rips off her vervain bracelet. Enzo then compels her to leave and forget about him.

Enzo is playing with a lighter and drinking whiskey. Enzo goes over to Stefan and stabs him for what I’m guessing isn’t the first time. Enzo is having fun torturing Stefan. Stefan however is not.

Bonnie and Liv are upstairs together. Bonnie wants Liv’s help in fixing the other side.

Enzo continues to torture Stefan. Damon comes to his and everyone else’s rescue and tells Enzo to let him and the hostages go. Enzo wants to know who’s side Damon is on. Damon takes a minute out to ask Stefan if he is Elena’s new study buddy but then it’s back to business. Damon tells Enzo he is the one that killed Maggie. Damon tells him he got a message from a woman and he went to meet her. She told Damon she was a reporter and she was interested in writing a article on him. Maggie ask him about the fire and Damon tells her he remembers it. Maggie tells him he sounds shallow and insincere. Damon apologizes and says he has a switch in his head that he uses to turn off unwanted feelings. Maggie then whipped out a syringe and tried to stab Damon with it. Damon noticed the Augustine logo and assuming she was there to take him back he does what any vampire would do he rips her head off and walks away. Damon tells Stefan he made it look like he did it because he was mad at him. Damon tells Enzo if he wants to hate him and kill him to get on with it. Enzo tells Damon he can’t hate him, if he does he has nothing left. Poor Enzo. Enzo comes up with a idea of his own and turns his own humanity switch off. Enzo tells Damon that now he doesn’t have a care in the world.

Sloan is lying on the floor and Tyler wants his body back. Julian has something to say about that. Sloan then sits up and says that the light hurts her eyes. She is told it’s the transition, so Sloan has now become a vampire. She gulps down a bag of blood and the she is brought the last of the doppelgänger blood. Marcos tells her it will break the witches magic. He chants as she guzzles it down.

Enzo is throwing glasses around. Damon tries to calm him down by asking him to go on a road trip with him. Enzo releases all the hostages except Liv , he wants a snack. Enzo starts drinking from her. Enzo then chokes Damon,throws vervain all over Stefan and takes off with Elena.

Elena tries to fight him but he breaks her neck. It’s at that moment that Stefan finds him. Stefan throws him threw a car windshield and it’s game on.

Bonnie tells Liv there has to be a way to fix the other side. Liv tells her there isn’t and she needs to tell Jeremy goodbye.

Damon finds Elena, sees she is still alive and picks her up and carries her off to some place safe.

Enzo has the upper hand and tells Stefan that right about now he probably wishes he had killed him when he had the chance. Stefan is laying up against a car and Enzo punches it making the gas leak. Enzo wants to know if they should burn together. Stefan grabs Enzo. Stefan tells Enzo he knows he won’t stop until he kills Damon. Enzo tells him the revenge will be sweet when Damon finds out that Stefan killed Damon’s best friend. Enzo then makes it so Stefan ends up ripping his heart out by throwing him backwards.

Damon lays Elena down and the receives a text from Enzo saying he is leaving to go to Cape Horn. Why Stefan why? Just tell him the truth for pity’s sake. Damon touches Elena’s head. Elena wakes up but no one is there. Stefan comes in and hugs her. Stefan tells Elena what happened with Enzo but tells her not to let say anything to Damon.

Bonnie is with Jeremy and Matt and they tell her the Travelers have Tyler. Bonnie tells Jeremy a lie and says that Liv thinks there may be a way to save her and the other side. Stefan calls Bonnie and tells her about Enzo and then tells her not to tell Damon. At the moment Enzo shows up in front of Bonnie. Enzo tells her he is good at revenge and he will see her again. Enzo passes through Bonnie.

Sloan wakes up….again to the chant of the Travelers. Marcos tells her it’s the moment of truth. He wants to know if she is still a vampire. Sloan slices her hand and does not automatically heal. Sloan is no longer a vampire thanks to the doppelgänger blood. Marcos tells her that with his magic they can end this once and for all and make a mystic Falls their home. Marcos then tells Sloan that she unfortunately won’t be there to see it and he snaps her neck. Marcos tells the Travelers they need more doppelgänger blood.

Damon is drinking when Stefan gets back. Damon knows Stefan is mad because of Enzo being in their lives. Stefan tells Damon that Enzo isn’t his problem and he needs to leave it be. Damon tells Stefan that it is because of Enzo that he didn’t become like Stefan and that he owes him for that. Enzo is watching and says he never lets go of a vendetta and this one is just getting started.

If you cannot wait until next week’s episode our sister site Celeb Dirty Laundry has some juicy spoilers and a sneak peek right here for you enjoyment.