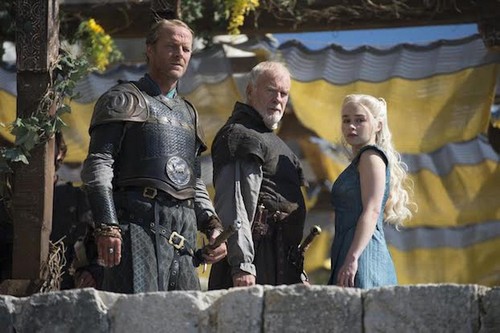 Hello, Game of Thrones fans. If you missed the most recent episode of HBO’s hit series, don’t you worry your little socks off. We have a review of Game of Thrones season 4 episode 4 “Oathkeeper.” Read below for the full review. If you don’t want any spoilers, then turn away now. What do you think of this new season so far? After you read the recap, let us know your thoughts in the comments section below!

Grey Worm is learning to speak The Common Tongue from Missandei. Daenery comes to get him and tells Grey Worm it is time. Grey Worm then sneaks into Meereen. Grey Worm tells the slaves how one day of freedom is better than a lifetime of slavery. The slaves tell Grey Worm that they are unarmed and untrained.

Grey Worm tells them he has taken care of that problem by bringing weapons. Grey Worm then reminds them there are three slaves to every master and therefore they outnumber them. Grey Worm tells them if they want their freedom they must take it. In no time the slaves have overtaken Meereen. The slaves than welcome Daenery she walks over to where their discarded collars are laying with a smile. The slaves call her Mhysa which means mother in Valyrian. Daenery says that she will work for justice. Daenery then selects 163 masters to be crucified just like the slave children. Daenery covers the Harpy with the Targaryen standard.

Jaime is training again with Bronn and Jaime once again is getting his ass handed to him. Bronn questions Jaime as to whether he wants to fight pretty or win. Jaime questions Bronn as to if he thinks Tyrion killed Joffrey. Bronn tells Jaime that Tyrion wouldn’t kill Joffrey even though he hated him because murder is not Tyrion’s style. Bronn also informs Jaime that he was Tyrion’s second choice to fight for him. Jaime was Tyrion’s first.

Jamie pays a visit to Tyrion in jail. Jaime takes a seat on the ground and tells Tyrion he is sorry for not coming earlier. Tyrion asks Jaime how Cersei is. Jaime tells Tyrion that Cersi asked him to kill him. Jaime ask him if there is anything he can do for him. Tyrion tells him he could let him go. Jaime tells him he can’t possibly do that seeing as how he is the The Lord Commander of the Kings Guard. Jaime brings up the trial. Tyrion thinks it doesn’t really matter because Cersi would want his head regardless. Jamie then tells Tyrion Cersei offered a knighthood for the finder of Sansa. Tyrion is adamant that Sansa would never kill anyone; it’s impossible.

Speaking of Sansa, she is looking out the window of her dreary boat. Little Finger walks in and informs Sansa that he will be marrying Lysa Arryn. Sansa thinks that Little Finger is responsible for Joffery’s death. Sana knows Tyrion is innocent. I find it absolutely adorable how no matter the relationship they know each other well enough to know the other would not kill someone. Little Finger tells Sansa she is 110% percent correct.

Tyrion had absolutely nothing to do with it, Sansa on the other hand……turns out the necklace Dontos gave her awhile back played a part in Joffery’s demise more specifically one of the stones in it, funny thing about the one that was missing, it poisoned Joffrey. Sansa thinks he is crazy and ask Little Finger why in seven hells he would take a risk like that against the Lannisters? Little Finger tells her he would risk everything to get what he wants. Greedy bastard that he is, he wants everything. Joffrey didn’t know Joffrey had to go…. by which I mean Little Fingers “new friends” wanted Joffrey dead and Little Finger was more than happy to make that so.

Margaery is walking with her grandmother Olenna. Olenna tells Margaery that she is going to leave King’s Landing. Olenna doesn’t plan on being there for Tyrion’s trial. Hint Hint Wink Wink. Margery is more concerned with whether or not the arrangements with Tommen have been made. Olenna makes sure Margery understands that Cersi is vicious and if given the opportunity she will turn Tommen against Margaery. Olenna explains that she could not allow her granddaughter to marry that beast Joffrey. This my friends is where it all comes together. Olenna wanted Joffrey dead.

Jon and the Nightwatch are doing what Jaime and Bronn were doing earlier. Everyone loves Jon and despise the commander Ser Allister. Locke is among the new recruits. Jon wonders why Lock came to join the Night Watch. Locke makes up some bs story about stealing for his family. Meanwhile Janos Slynt notices how much everyone takes to Jon and suggest that Jon be allowed to lead at Craster’s Keep so he will be killed before the next election for Lord Commander.

Jaime goes to see Cersi who is engaging in her favorite hobby…drinking. Cersi ask Jaime how many men are guarding Tommen. Cersi is none too pleased when Jaime informs her there is just one outside his door. Cersi wants to know if he would kill Sansa if she ask. She probably figures he owes her for the rape. Cersi then demands to know why Catlyn Stark let him go. Jaime tells her he promised Catlyn he would send her daughters home. Cersi’s main bitch is that Jaime went to see Tyrion. Jaime decides to piss her off a little more by telling her he believes that Tyrion is innocent. Cersi states that four guards are to be put at Tommen’s door. Cersi then dismisses Jaime.

Tommen hears a noise and gets up to investigate. Tommen sees Margaery and ask her how she got in. Tommen makes it clear his mother does not permit people in his room. Margaery reminds Tommen that she is going to be his bride. Margaery assures him it will be their little secret. Margaery states that Joffery was a cruel person but that Tommen is not. Tommen agrees. Margaery kisses him on the head and tells him it’s getting late and to remember that her visit is their little secret. Margaery wants to visit Tommen again.

Jaime gives Brienne the Valyrian sword made from Ice. Jaime tells she is to use it to protect Ned Stark’s daughter (Sansa). Jaime wants Brienne to find her and keep her safe. Jaime also had a new suit made for Brienne out of boiled leather and armor. Brienne assures Jaime she will find Sansa for Lady Catlyn and him. Jaime also assigns Pod to go with her. Bronn shows up with an ax Tyrion sent for Pod. Brienne names the sword “Oathkeeper.” Jaime watches as she rides away.

Jon is worried about Bran and so he ask Ser Allister if he can head to Craster’s Keep. Allister agrees but refuses to send any men with Jon. So Jon ask for volunteers to come with him. One by one men volunteer to go with Jon much to Allister’s disbelief. Locke offers to come but Jon nixes that. Locke wants to take his vows. Jon thanks all the men who are going with him.

Karl is now running the show in Craster’s Keep. By running I mean drinking wine from Mormont’s skull and letting his men rape Craster’s daughters. One of the wife’s comes in with the last son of Craster. The wife explains that Craster offered the baby boys to the Gods. Karl sends Rast to leave the baby in the forest. On his way back he stops and goes over to Jon’s wolf Ghost. Rast teases Ghost a bit.

Bran, Hodor, Jojen and Meera all can hear the baby boy crying. Bran wants to go see what it is. They ask him not to but he jumps into his wolf’s body and goes anyway. Bran sees Jon’s wolf Ghost. When Bran returns to his own body he informs them of what he saw.

They all spy on Karl and company the next morning. Meera wants to leave but Bran won’t allow it. In the end it doesn’t make a difference because some of Karl’s men find and surround them. Karl ask Bran who he is. Bran says nothing. Jojen falls down and starts to have a green dream fit. Meera runs to help him but Karl stops him with a threat and a knife to his neck. Bran has no other choice but to tell Karl he is Bran Stark of Winterfell. Karl is happy with his new hostages because he knows they are worth something.

A white skeleton is riding through the forest on a dead horse holding Craster’s baby boy. He puts the baby on a icy altar and he leaves. Then someone else approaches wearing all black. He touches the baby’s cheek with his finger and the baby’s eyes turn blue.

CHECK OUT THIS SPOILER FOR NEXT WEEK’S EPISODE — CLICK HERE!