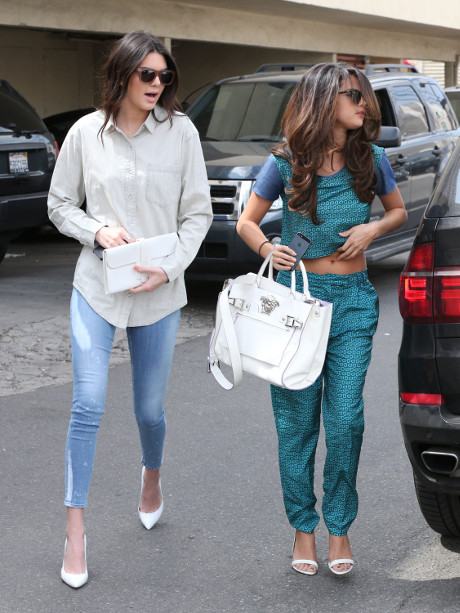 Selena Gomez had a social media meltdown last week and ended up unfollowing most of her ‘friends’ and acquaintances. This includes Justin Bieber, Taylor Swift, and the Jenner sisters, Kendall Jenner and Kylie Jenner. At the time, reports suggested that Selena was trying to cleanse all the negative influences from her life, including anyone associated with the Kardashians.

Considering that this Instagram purge occurred right after the Coachella music festival – and Selena was actually spotted with the Jenners during the festival – it’s obvious that something happened at the festival to anger and upset Selena. Whatever it was, sources close to Selena have revealed that she considers the Jenners a toxic influence and wants nothing more to do with them.

Obviously, Kendall and Kylie aren’t going to take that lying down, are they? Sources close to the sisters have told TMZ that they feel ‘better off’ without Selena, adding, “Not only do Kendall and Kylie eschew drugs and alcohol … they believe Selena’s the real drama-obsessed party girl. After all, she’s the one who’s been to rehab.”

Wow. Kendall and Kylie ‘eschew’ drinking and drugs? Seriously? Talk about a bald-faced lie. Obviously, they’re trying to pretend as though they want nothing to do with Selena anymore, even though she was the one who dumped them. But of course, none of the Kardashians’ egos can handle being dumped, so we’re getting gossip-sanctioned reports on how much ‘better off’ the girls are without the bad, bad Selena Gomez.

Right. And I’m sure Kendall and Kylie never drank or smoked or partied with Selena – not even at Coachella, despite the fact that they were spotted together. I’m sure.