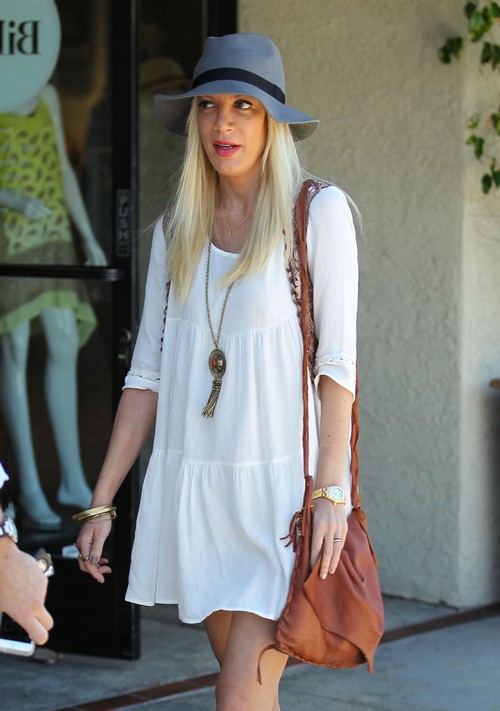 Rumors of Tori Spelling‘s downward spiral have been going viral for the last week, and it’s clear that she needs help. Sources close to Tori have revealed that she’s abusing her pain pills, and that she’s also sinking deeper and deeper into depression following the Dean McDermott cheating scandal.

A friend tells In Touch Weekly, “She’s physically weak and hasn’t been eating. She’ll be going to rehab for depression and for all the medications she’s been taking. She knows she needs help.” Apparently, she’s planning to admit herself into a treatment facility outside of California, hoping to get some peace, quiet, and privacy – away from her life in Los Angeles.

Tori was admitted to the hospital last week for a ‘migraine’, and sources have added that while Tori definitely did have migraines, it was a combination of abusing powerful prescription pain pills that brought on the migraines. The source adds, “What she’s doing is dangerous. Mixing Xanax and OxyContin for anxiety and medication for her migraines and an antidepressant is not working well for her.”

Tori is also apparently addicted a narcotic called Dilaudid, which is reportedly nine times stronger than morphine. Sources add that Tori uses migraines as an excuse to go to the hospital and be given Dilaudid, even if she doesn’t necessarily have any headaches at all.

Clearly, there’s much more going on with Tori than meets the eye, but I have a feeling she’s not even thinking of going to rehab until her reality show has finished.  Do you agree? Let us know your thoughts in the comments below.