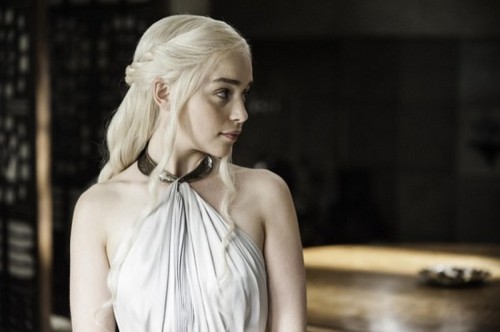 Hello, Game of Thrones fans. If you missed the most recent episode of HBO’s hit series, don’t you worry your little socks off. We have a review of Game of Thrones season 4 episode 5 “First of His Name.” Read below for the full review. If you don’t want any spoilers, then turn away now. What do you think of this new season so far? After you read the recap, let us know your thoughts in the comments section below!

Tommen is being crowned what is essentially a boy king. Cersi, Tywin and and Jaime are all watching. Margaery is there and after Tommen and her share a look Cersi walks up to her and they have a chat. First Cersi ask Margaery if she is still in mourning over the loss of the annoyingly wicked King Joffrey. Margaery lies through her teeth and tells Cersi she absolutely is. Cersi thinks Margaery is lying and then as if she needs a reminder Cersi tells Margaery that she knows exactly what Joffery was.

Cersi then tells Margaery that it is quite possible that little Tommen would be the first one to deserve the title of king in over fifty years. Cersi also tells Margaery that he will need someone to help him navigate his long journey as King. Hint, hint,wink, wink. Cersi ask Margaery if she would be okay with marrying a little boy. Margaery always the sly one tells Cersi she will need to think about it as well as discuss it with her father. Please this girl wants to be Queen more than King Louie wanted to learn how to make fire. Margaery inserts a snide remark about not knowing if she would call Cersi mother or sister.

In Meereen Daenery receives to pieces of news neither of which is good. First she learns that Joffery bit it wedding style, it’s so in to die that way these days. Second she hears about the fact the slaves she freed literally a episode ago are in danger of becoming slaves again. What’s a girl with a boat load of ships to do. Daenery decides to stay in Meereen and do what queens do best, she will rule.

Little Finger has Sansa and he is taking her to meet her Aunt Lysa who is a literally a game of croquet throw away from being as crazy as the Mad Hatter. Speaking of nuts her son Robyn has already taken a trip down the rabbit hole and I seriously doubt his mind is coming back , and could someone please tell her to stop cuddling with him it’s so ewwwwww. So besides tons of sympathy felt for Sansa the come away from this scene is that Little Finger is not the only one who had it out for the Lannisters. You see Sansa’s bat shit crazy Aunt Lysa also had it out for them, why she is in fact the one who helped set this whole game into motion starting way back in season one or as Lysa puts it she drafted a fake note to Catelyn blaming the Lannisters for killing John way back then. Yup folks it’s that letter. The Ned Stark went to King’s Landing and shit has been going down ever since letter. Unfortunately that isn’t all Lysa lays on Sansa. Apparently Sansa is to marry Robyn. Poor Sansa I bet her life with Tyrion is looking like a piece of cake at this point.

Apparently the Lannisters are broke. Well yeah seven kingdoms will do that to your wallet. Tywin tells Cersi they lost it all about three years ago. That is why they must buckle down and marry the still very rich Tyrells. Cersi agrees to marry Loras but as we all know there is always a price for anything Cersi does and this time I fear it will come at the price of Tyrion’s head. Tywin tells her with her marriage to Loras and Tommen’s to Margaery that will seal the deal and the families will become one.

Arya is still keeping company with the Hound. They are having I assume what passes for normal in their world a night by a fire. Arya informs the Hound that he is just a another name on her long long list of people to kill. The Hound who seems undaunted by this want to be little girl assassin tells her what she really needs is a suit of armor and a sword with a more intimidating name than needle. No what she needs is a good kick in the ass.

Lysa approaches Sansa and throws a fit all because she thinks Little Finger has a thing for Sansa. Sansa couldn’t be more grossed out if she tried. Sansa soothes her by assuring her no way no how is that a possibility.

Pod and Brienne are riding along looking for Sansa. They have a bit of a argument that ends with Brienne telling Pod to take a long walk off a short cliff. Pod refuses, he was told to stay with her and that’s just what he intends to do.

Cersei’s pays a visit to Oberyn Martell and her daughter who she gives a boat. Cersi is proving she really is the dirtiest player in the game. Cersi has literally managed to give all three people who will hold Tyrion’s fate in thier hands exactly what they want. Mace’s daughter Margaery will be Queen again. Cersi is marrying Loras to help her father Tywin and Oberyn and Cersi have a daughter together.

Bran and the rest are still being held. Meera is being told she will be getting raped. I sense a theme on this show these last few episodes. Jojen for whatever reason decides he will try to lighten the mood by pointing out he will be set ablaze. Locke for whatever reason takes Bran, my guess is because he is Jon’s little brother. In the end it doesn’t matter what likes reason was because he ends up getting done in by a Bran possessed Hodor. Bran is determined to see Jon until JoJen points out the danger in Jon seeing Bran and wanting to keep him safe. Bran sees his point and decides staying out of sight and out of mind is the best way to go. So basically they were only on the last two episodes to roam around for lack of something to do. Good grief.

Jon has his sights set on Karl and after one of the wives manages to catch him off guard by stabbing him Jon does something I’ve only ever seen done with a carrot and a pencil up to this point. Jon shoves his sword through the front of Karl’s head and he uses so much force it’s comes out the back of his head. So nasty. Jin offers the women and their daughters the chance to leave and go to Castle Black with him but they decline. I guess they have to many happy memories of home. In the end Craster’s house goes up in flames.

CHECK OUT THIS SPOILER FOR NEXT WEEK’S EPISODE — CLICK HERE!