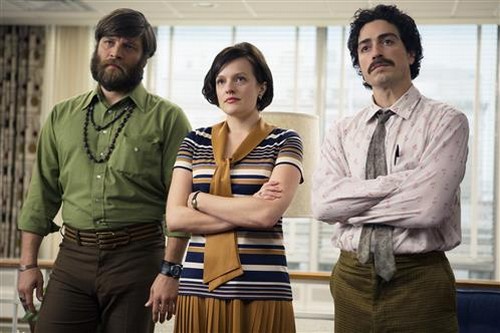 Here’s what happened on Mad Men Season 7 Episode 4 “The Monlith.”  Pete is having dinner with Bonnie. Pete and George just happen to cross paths at the restaurant. George tells Pete that he works at a new company now called Burger Chef. George also tells him about Tom’s heart attack. Pete is clueless that Tom had a heart attack. Before parting ways Pete gives George his business card. Once Pete has left George returns to his dinner date.

Don walks into his office and it’s empty, the phone is even off the hook. Don hears the sounds of voices and follows them upstairs where he finds everyone else. They are all meeting with a contractor about turning the lounge into a computer room. Because this is back in the day people, before they fit in your lap. Don decides to head back to his office and comes upon a orange flag that says New York Mets. Don throws it away and smokes a cigarette.Roger, Lou, Pete and Ted are having a conference call about George and Burger Chef. They want Ted to handle the account. Ted would rather he didn’t and suggest they give it to Peggy. Pete thinks it would be in better hands with Don. Everyone agrees except Lou who is sure that Don will find away to mess it up somehow.

Mona and Brooks come to see Roger at the office. Margaret has gone and run off with a cult full of hippies. Brooks wants Mona to watch their little boy. Bonnie says that roger needs to find Margaret and drag her hippie loving cult butt back home where it belongs.

Don has a meeting with the contractor who is putting in the computer. Don isn’t happy about his employees having to give up their lunchroom for the computer. Lloyd thinks it’s because everyone is a afraid that they will be replaced by it.

Peggy gets called into Lou’s office where he informs her he is going to be paying her a hundred dollars more a week. Lou then tells her she is in charge of the Burger Chef account. Peggy can make up a team of whoever she likes on one condition Don has to be on the team.

Peggy calls Don to her office and makes a big show of saying she selected him to work with her on the Burger Chef campaign and that he is in charge of coming up with twenty five slogans that might help them with it.

When Roger gets to work he finds out that Brooks got arrested and is in jail in Kingston.

Peggy is getting ready for her Burger Chef meeting when Don tells her thanks but no thanks he won’t be coming. Peggy tells another member of her team to come up with the twenty five slogans that Don won’t be bringing.

Meanwhile Roger and Mona are headed to Kingston to get Brooks out of jail.

Lloyd comes to see Don. Lloyd wants him to do advertising for his company. Don goes to Bertram’s office and tells him that he needs to take on Lease Tech. Don tells Bertram that the company’s growth is going to be huge. Bertram reminds Don that his role is limited in the company and it isn’t his job to land new clients. Don is pissed and takes off out of Bertram’s office. On his way back to his office he snags a bottle of drink from Rogers office.

Roger is now headed to get Margaret with Mona. When they find her she is using the name Marigold and looks like she has been buried in dirt. Mona tells her to come home. She tells her she would rather stay there then be like Mina and have to lock herself in the bathroom with a bottle of gin everyday. Mona stalks off and gets in the car. Roger tells her he is staying at the commune with her.

Don is shammered in his office and thinks now is a good time to call someone up and invite them to a baseball game.

Meanwhile back over in the land of hippies Roger is getting high with them but not so high that he doesn’t realize they have a truck but no electricity to use for it.

Freddy is trying his damn hardest to sneak Don out before anyone sees that he is three sheets to the wind. Turns out it’s a impossible task because Don feels the need to get in the face of Lloyd before Freddy can get him out. Peggy is put on notice that they are going to a baseball game. Peggy is not happy and indicates that to Joan in a phone call.

Roger is laying next to his daughter on the grass. Margaret tells Roger that she is really happy. Roger says he can tell.

Freddy sits him Don down on his couch at home. Don is still lit and doesn’t understand why he isn’t really at a baseball game. Don needs to hit the shower. When he wakes up several hours later Freddy is still there. Freddy ask him why he is determined to blow he second chance at the firm. Don is mad that they want him to write slogans for Peggy. Freddy tells him to quit bitching and man up.

When Roger wakes up the next morning on the grass and sees that Margaret is missing he gets upset. She apparently left him to shack up with one of the guys. Roger walks over to Margaret, picks her up and tries to force her into the truck. Margaret tells him what she is doing isn’t any worse than when he would stay at work for months. Roger has no fight left and just leaves Margaret there.

Don shows up at work the next day looking remarkably well with not a sign of a hangover anywhere. Peggy comes to his office and don informs her he will have her slogans for her by lunch. Peggy looks pleased and leaves. Don gets behind his type writer and starts working.