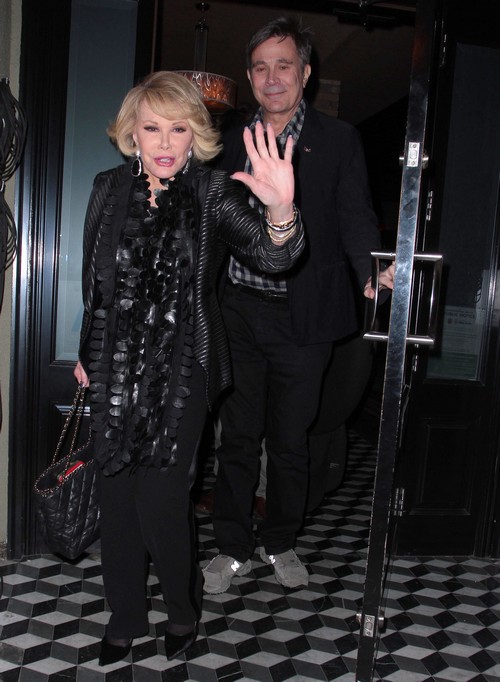 Joan Rivers doesn’t care about getting criticized for her humor, but sooner or later, she’s not going to have anybody supporting her. Joan’s infamous for making tasteless jokes that often are very crude and insulting, but she’s always defended her jokes for the sake of comedy. However, she really does go too far sometimes, and this might be another one of those cases. Joan recently made a kidnapping joke about the three women that were held captive in Cleveland by Ariel Castro, the case that made headlines all over the world last year.

When interviewed by Today and asked about living with her daughter, Joan had stated, “I’m still in the same stupid little room. Those women in the basement in Cleveland had more space.” Two of ‘those woman’ demanded apologies via their reps, but Joan refused to say sorry, stating, “I’m a comedienne . . . There is nothing to apologize for. I made a joke. That’s what I do. One of them has a book deal. Neither are in a psych ward. They’re OK . . . I bet you within three years, one of them will be on ‘Dancing With the Stars.’”

Ouch. But for her lack of tact, Joan is having to pay the price. According to reports, Joan and her daughter, Melissa Rivers, have been kicked off a Norwegian cruise for the controversy surrounding Joan’s joke. Both Joan and Melissa were booked on a July cruise to Alaska, where they would reportedly be giving lectures to the guests and occupants. However, the cruise line reportedly called Joan on Friday to tell her that she and Melissa were no longer welcome on their ship. A source tells Page Six, “Someone from their marketing team called Joan and said they didn’t want her. They said they’re a family-friendly brand.”

And because Joan simply can’t keep her mouth shut, she felt the need to retaliate to their decision to kick her off. When asked for her comments on the situation, Joan stated, “Of course they canceled me! They were terrified what I would say after seeing the size of their cabins. They should be featured on ‘Orange Is the New Black.’ It’s insane. Why would [the joke] affect anyone in Norway?” She also added that if anyone should have been insulted, it should have been Melissa – since Joan made fun of her room.

Um, Joan clearly doesn’t understand the delicate line that you need to maintain with comedy, especially with sensitive issues. But then again, when has Joan Rivers ever expressed an understanding of sensitive issues? Yeah, that’d be never.