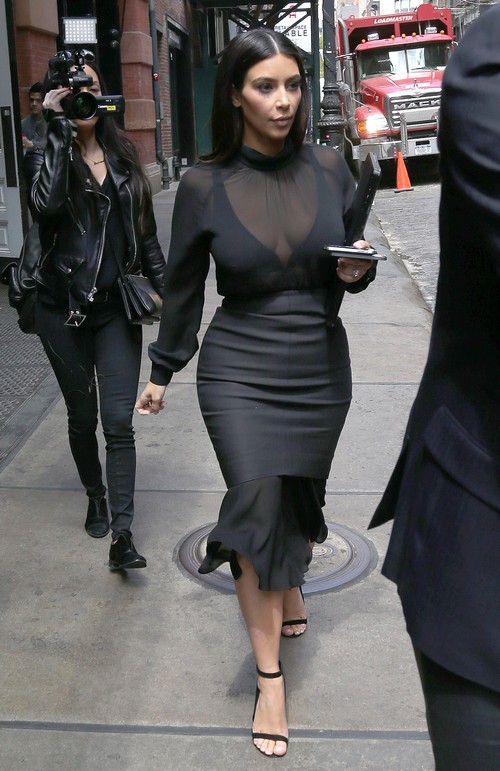 Kim Kardashian wants a big family. Well, of course she does. She has an entire staff looking after North West, and she can trot out her daughter whenever she needs a quick shot of publicity. Why wouldn’t she want more children to use for her own gain?

Ok, maybe I’m being a little harsh. Maybe Kim and Kanye West are excellent parents, and maybe they’ve always wanted a big brood. Maybe Kim’s always nurtured a desire to become the Angelina Jolie of the reality television world, and these are just the beginning steps in achieving that goal.

Anyway, Kim’s been giving plenty of interviews lately [probably trying to drum up advance buzz for her wedding], and she explained, “Being a mum is] amazing. But pregnancy was not a good experience for me… I had medical problems. But North is worth it, she changes all the time. One day she’ll look like Kanye, the next like me. She is very calm and quiet. I want about six children.”

She claims that she has medical problems, yet she wants to have six children. Is it just me, or does that seem like pressure from Kanye coming into play here? We know he wants a lot of kids, and it looks like he’s transferred that desire onto Kim.

I mean, I can see why Kim wouldn’t want to get pregnant again, even removing any medical issues from the equation. She was tortured by the media and the press practically every day that she was pregnant, largely due to her weight and her pregnancy outfits. Yes, it’s her fault for calling the paparazzi, but nobody deserves to be fat-shamed by the media, right?

What do you guys think? Will Kim and Kanye actually end up having six children? Let us know your thoughts in the comments below.