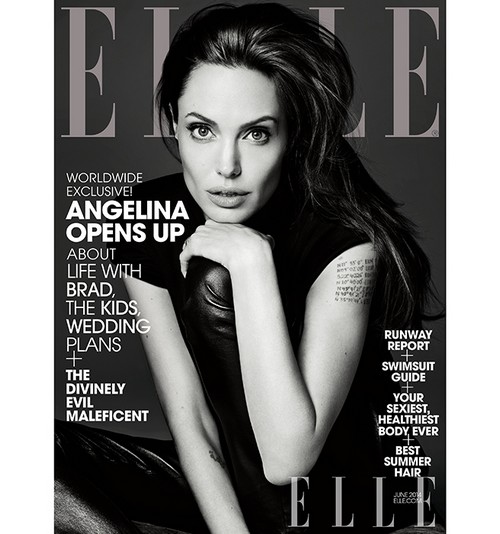 Angelina Jolie is a movie star, one of the last few remaining in Hollywood right now. Despite being on tabloid covers for all the wrong reasons in her twenties, she’s somehow managed to turn her life around and become one of the few actresses who can still command a $20 million salary per film. That’s not even counting all the humanitarian work she does, her married life with Brad Pitt, and the fascination that the public still holds with her. Despite her fame, Angelina still remains something of a mystery, and her latest interview with Elle Magazine sheds only the barest light into her private life.

Angelina’s currently promoting Maleficent, Disney’s dark re-imagining on Sleeping Beauty. As part of the promotion for the film, she conducted a candid interview with Elle for  their latest cover issue. She opens up about her tumultuous 20s, explaining, “It was misinterpreted as [me] wanting to be rebellious/ And in fact it wasn’t a need to be destructive or rebellious—it’s that need to find a full voice, to push open the walls around you.”

And will her children be following her into Hollywood? Vivienne Jolie-Pitt, her youngest daughter, plays the young Aurora in Maleficent, but Angelina adds that she’s not keen on her children joining the entertainment industry. She explains, “Brad and I made the decision that we wouldn’t keep them from sets and the fun of making movies, but we wouldn’t [glorify it either]—we wouldn’t make it a good thing or a bad thing. But I would really prefer they do something else. After two days of it, Brad and I were so stressed we never wanted to do it again.”