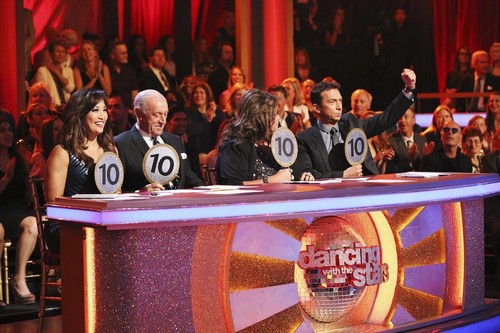 The season finale of Dancing with the Stars is approaching, and with it, another round of elimination. In episode 1809 next week, a.k.a. the semifinals, award-winning choreographer and director Kenny Ortega [High School Musical] will be a guest judge on Dancing With The Stars. Kenny will join the judges table, which includes Carrie Ann Inaba, Bruno Tonioli, and Len Goodman. Kenny has plenty of judging experience, as he has previously guest judged So You Think You Can Dance several times, and he’s also directing the new Dirty Dancing movie.

There are only five couples left on the show, and they’ll be dancing to two different routines to music from ‘legendary and modern American icons’, according to the press release. These icons include everyone from Beyonce to Elvis Presley, and there will also be a Macy’s Stars of Dance routine included in the show that will feature 28 different dancers.

By the end of the night, yet another couple will be eliminated, leaving only four couples to advance to the finals. Who do you guys think is going to eliminated? Let us know your thoughts in the comments below.