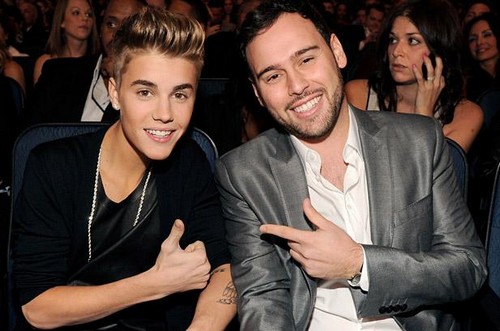 Uh-oh, Scooter Braun‘s caught between a rock and a hard place, isn’t he? As we all know, the lawsuit against Justin Bieber for attacking the Florida-based photographed is currently underway, and Scooter [as Justin’s manager] will reportedly get deposed and questioned about possible steroid use on Justin’s part.

A source tells In Touch that Scooter was subpoenaed last month, and the deposition will reportedly be taking place on May 15th in Los Angeles. The source also explains, “Scooter will be asked about what kind of advice Justin has received about handling photographers and did he ever discuss wanting to lash out at them. It has also been circulating that Justin has been abusing steroids, and so if that is the case it will result in his aggression and aggressive tendencies. That’s something Scooter will definitely have to answer to.”

Granted, people lie under oath all the time, especially if they’re trying to prevent their clients from going to jail. Scooter has a lot on the line right now, and if he loses Justin as a client, he’ll end up losing his biggest meal ticket. Of course, he’s established enough of a name for himself that he won’t necessarily be in dire straits, but it’s still a difficult decision for him to make. I mean, let’s face it – it’s very, very likely that Justin has dabbled in steroids, and even apart from that, we know that he’s done other drugs. So whichever way Scooter turns, he’s stuck with the same answer.

The real question is – will he choose to perjure himself, or try to get out of answering the question somehow? Or will he answer truthfully and risk losing Justin as a client? The photographer’s lawyer has already confirmed that they will be asking Scooter about Justin’s erratic and violent behavior, which has been well on display for the last year. But Scooter has defended Justin in the past, and he’ll be under a lot of pressure to do the same in court.