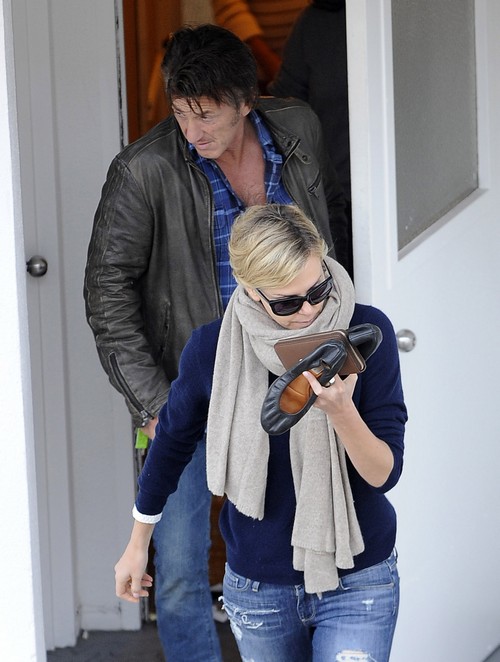 Sean Penn and Charlize Theron haven’t even been dating a year, but they’re already planning their wedding. Even though Sean hasn’t yet ‘popped the question’, sources tell Life & Style that Charlize is already planning to say yes, and has even started shopping for her wedding dress.

Eh, would Charlize Theron ever act that desperate? I don’t think so. Still, Life & Style’s source insists that Sean and Charlize have already started planning their wedding, even though they’re technically not engaged yet. Apparently, they both realized that they’re happier together than they’ve been in ages, and they want to make it official as soon as possible.

The source explains, “They are going to use a wedding planner, but they brought along Charlize’s mom, Gerda, and Sean’s mother, Eileen, to discuss strategy. They plan to have 200 guests on the beach in Malibu sometime in August. Sean wants his musician brother Michael to be his best man, and Charlize has respectfully asked her mom to be her maid of honor.”

You know, I would never have believed you if you had told me last year that Sean Penn and Charlize Theron would be in a serious relationship. Even though the couple has only been together for five months, they’re acting like they’ve never been in love before, and both of their personalities have drastically changed in the time they’ve been dating. So even though the new-couple glow will probably fade in a while, I wouldn’t be surprised if Sean and Charlize get married during their relationship honeymoon period – but then again, I’d be very, very surprised if their marriage actually lasts.