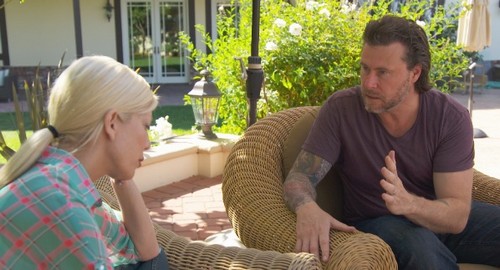 Tori Spelling’s reality TV series, titled True Tori, is currently airing on Lifetime and documenting Tori and her husband Dean McDermott’s journey as they try to repair their wrecked marriage.  Last year Dean McDermott had an affair with a woman named Emily Goodhand whil working on set in Canada, the affair went public and launched Tori and her children into a media firestorm.

Now, Tori Spelling and Dean are trying to get back on track and put the pieces of their marriage back together, all while a camera crew follows their ups and downs, documenting their highs and lows.  Right now on True Tori Dean appears determined to make amends with Tori, and has apologized profusely and claimed he will never hurt her and their family again.

Either Dean is a really god actor, or True Tori is a complete sham.  Spoiler alert, they don’t repair their marriage, it actually gets worse.  According to a new report from Radar Online, Dean is back to his old ways, and this time his infidelity is much closer to home.  According to Radar’s source, “Dean began brazenly hitting on a hot mom in their son Liam’s class.  She is a busty blonde, and always impeccably dressed, even for pick-up and drop-off. Before the cheating scandal made news, Dean was openly hitting on her. He would just say really inappropriate things to her, and complained Tori wasn’t giving him sex. It got very awkward, as she never reciprocated any of Dean’s overtures.”

This begs the question, is True Tori completely staged?  Rumors have been floating around for weeks now that the reality TV series is completely fake and scripted.  If Dean is still sniffing around other women then obviously he lied about his intentions to clean up his act, or he was told to say those things on camera to make the show more interesting.