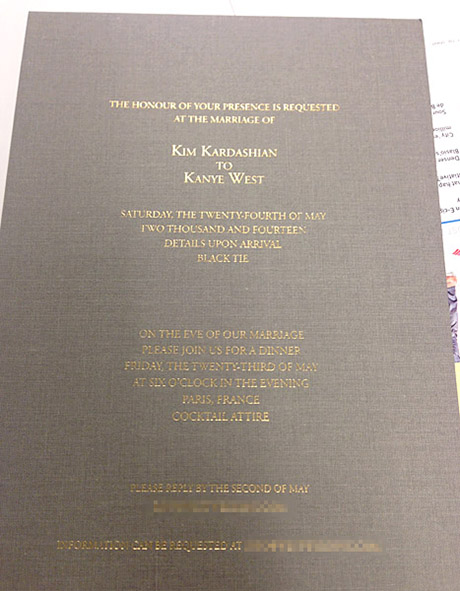 Kim Kardashian and Kanye West have finally started sending out wedding invitations, and of course, a copy of the invitation leaked immediately. It’s a very simple invite, with gold letters on a gray background. It states that the wedding will take place in Paris on May 24th, and the dress code is black tie. There’s also a rehearsal dinner on the previous night at 6 P.M., and the guests are required to wear ‘cocktail attire’ there.

The guests will apparently receive the rest of the details ‘upon arrival’, which is a little foreboding. Are Kim and Kanye going to surprise their guests with an E! video camera, ready to record their every move? Kim has confirmed that she won’t film the vows for their reality show, but the rest of the show? Yeah, there’s no way E!’s going to give up this opportunity, especially since Kim is contractually obligated to share it. Plus, I doubt the Kardashians don’t want to share it with the world. In fact, I’m guessing Kim’s most excited about the fact that she’s going be the center of the world’s attention for that one night, more so than the fact that she’s getting married.

The invites have reportedly been sent to only a 100 guests, so it’s obvious that Kim and Kanye are trying to keep this a more ‘intimate affair’, unlike Kim’s fiasco of a wedding to Kris Humphries. Um, sure – inviting cameras to witness your special moment and document every little detail is very ‘intimate’.

Of course, what else can we expect from the Kardashians at this point? Their shtick has become common knowledge, and after this wedding, we can only hope that Kim fades back into the oblivion from which she came.