First Look At The Walking Dead Season 5 Shows Rick Grimes Alive, But Nothing For The Rest Of The Characters 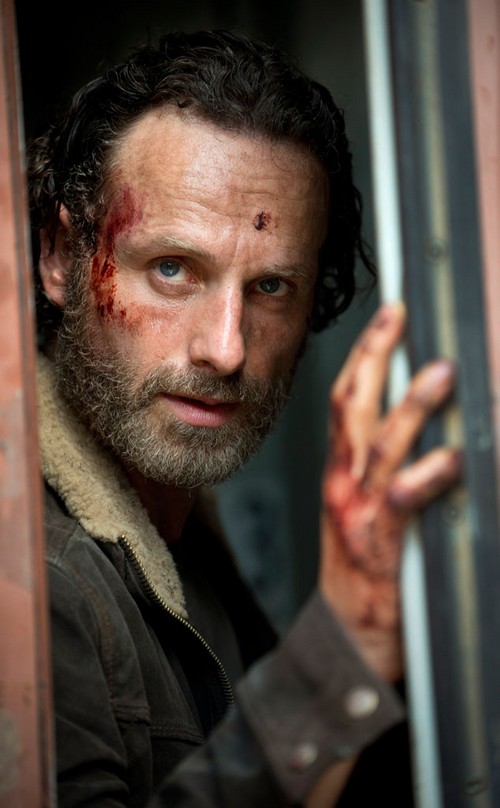 We’ve got out first look at Season 5 of the Walking Dead, and predictably, it’s a still of Rick Grimes, looking dirty and brooding – basically, the way that Rick Grimes always looks. The image shows Rick wearing the same clothes he was wearing at the end of Season 4, and although he’s sporting some blood on his face and hands, he looks otherwise alive and healthy – if grim and determined.

Of course, there’s simply no way they’re going to kill of Andrew Lincoln‘s Rick Grimes anytime in the foreseeable future, but we can’t be so sure about the other characters. The cast and showrunner have teased a major character death in Season 5, and we can pretty much count on someone big dying thanks to the no-death count of the Season 4 finale. Since we know that Rick is alive and well, we can only speculate as to the fate of the other characters.

Right now, Rick is locked in a large container at Terminus with his son, Michonne, Sasha, Maggie, Glenn, Tara, Daryl, Eugene, Abraham, and Rosita. Beth was kidnapped at the end of the last season, so we’ll assume she’s still with her captor. Carol, Tyreese, and Judith, on the other hand, are still making their way to Terminus. We don’t know what’s going to happen once the characters meet up again, or if they’ll even meet up again. But one thing’s for sure – the showdown at Terminus is happening, and it’s happening soon.