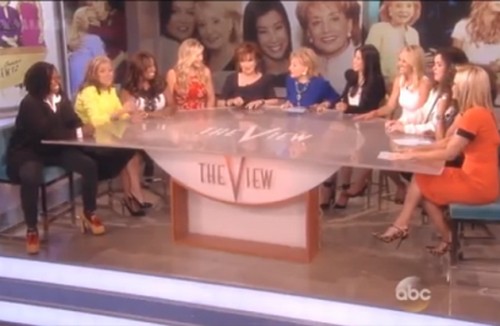 The View isn’t taking Barbara Walters’ good-bye lightly, nor should they. As much as Barbara may have lost her golden touch recently, she’s still been a staple on our televisions for the past twenty years, jumping from show to show. Everybody in the country knows who Barbara Walters is, and seeing her take her leave from The View still holds historic significance.

As such, The View decided to bring back every co-host in the show’s history to round out their good-bye to Barbara Walters. As part of Barbara’s second-to-last show, the producers ended up bringing back Meredith Vieira, Rosie O’Donnell, Star Jones, Elisabeth Hasselback, Debbie Matenopoulos, Lisa Ling, and Joy Behar. They joined the current hosts, Whoopi Goldberg, Sherri Shepherd, and Jenny McCarthy.

Joy joked during the segment, “This is like The Last Supper with Barbara as Jesus.” Um, I wouldn’t go that far. But as I said earlier, it is a historic moment, only because Barbara has left behind such a big legacy. If it was anybody else – especially somebody like Jenny McCarthy, I doubt people would care as much. But because it’s Barbara Walters, everybody is pulling out the stops to bid her farewell.

Plus, Oprah Winfrey and Hillary Clinton both showed up as surprise guests, which has been in keeping with the theme of tonight: A Very Important Occasion, In Which Barbara Walters Leaves The View.

What do you guys think of the co-host reunion on The View? Was it a bit much, or was it necessary for Barbara Walters? Let us know your thoughts in the comments below.