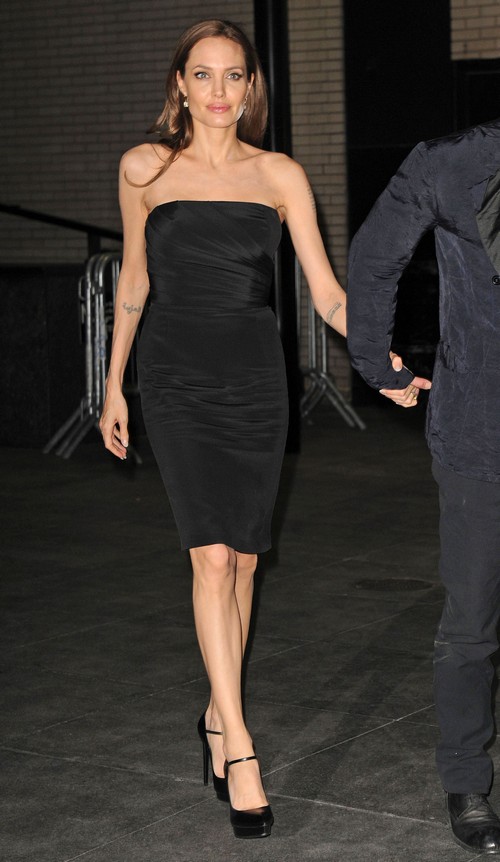 Angelina Jolie and Brad Pitt may have been together for ten years, but that doesn’t mean the media will stop trying to set them up with other people – especially when these other people are ex-husbands.

According to Angelina’s old tattoo artist, Friday Jones, Angelina’s Billy Bob Thornton tattoo was incredibly intimate and ‘sexy’, far more than any tattoo that she’s [publicly] gotten for Brad Pitt. Jones spoke to Radar Online and explained, “Angelina was in a stage in her life where she was pushing her envelope romantically. Mind you, the fact that she was tattooed at all was very risqué.”

Yeah, I think we got that part with the whole vial of blood situation. Either way, Angelina has been open about that period of her life, and admitted that her behavior was bordering on reckless and obsessive. We know her relationship with Billy Bob was filled with drama and crazy, and the tattoo seems to go in line with that.

Of course, her divorce made her reconsider getting such permanent tattoos, and she proceeded to get them removed – both the bikini line tattoo and another on her upper arm that bared Billy’s name. So really, Brad Pitt should have no reason to feel jealous, especially since he’s had a more stable relationship with Angelina than any of her ex-husbands, and they have six children together. If he’s still getting jealous over tattoos that don’t even exist anymore, no matter how ‘sexy’ they were, then they have more serious problems in their relationship.